Universe ‘child of previous one’

John C. Trever, one of the first Americans to examine the Dead Sea Scrolls in 1948 and whose photographs of the ancient texts also became important historical 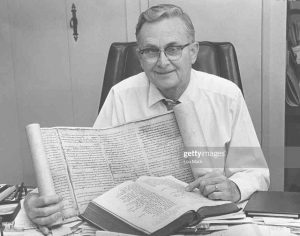 Trever, who was the last surviving member of the original group of Western scholars to study the scrolls, died Saturday at his home in Lake Forest, his family said. No cause of death was given.

As an American student in Jerusalem, Trever came face-to-face with the scrolls when Syrian monks brought them to be evaluated at what is now the W.F. Albright Institute of Archaeological Research.

When Trever unrolled one of the scrolls on a cot in his living quarters, he couldn’t believe what he was seeing. The document — said to have been found in a cave by a Bedouin shepherd in 1947 — contained text from the biblical book of Isaiah.

A student of ancient handwriting, Trever thought the writing on the scroll resembled that of the Nash Papyrus, then the oldest known fragment of an Old Testament text, a sample of which happened to be hanging on the wall.

“I put a magnifying glass to the scroll … and said to myself: ‘Oh, my Lord, can I really be looking at something 2,000 years old?” Trever told the Chicago Tribune in 1989. “Then I remembered that in the haggling customs of the Near East, one doesn’t tip his hand precipitously. ‘Yes,’ I told the Syrians, ‘this might be worth something.’ ”

An avid amateur photographer, Trever persuaded the monks to let him photograph the three manuscripts.

After he sent copies of the photographs to biblical scholar W.F. Albright at Johns Hopkins University, Albright responded via letter: “My heartiest congratulations on the greatest manuscript discovery of modern times!”

Today, Trever’s original negatives are housed at the Ancient Biblical Manuscript Center at the Claremont School of Theology, one of several colleges at which he taught.

“The scholarly world and the general public should be indebted to him for preserving images of the Dead Sea Scrolls,” said Marvin Sweeney, who runs the manuscript center and is a professor of Hebrew Bible at the Claremont school.

The photographs are central to the documentation of the scrolls because they reflect their color and condition when first studied. The scrolls have since deteriorated and are best studied under infrared light, Sweeney said.

John Cecil Trever was born Nov. 26, 1915, in Milwaukee. He received a bachelor’s degree from USC in 1937 and a doctorate in Old Testament studies from Yale University in 1943.

During the late 1940s and early ‘50s, Trever worked for the National Council of Churches, promoting and explaining the revised standard version of the Bible.

The quiet scholar spent much of his life lecturing and writing books on the scrolls.

His 1965 book “The Untold Story of Qumran” provides the most complete account of the initial discovery of the scrolls, wrote James VanderKam and Peter Flint in their 2002 book, “The Meaning of the Dead Sea Scrolls.”

Trever is survived by his wife of 68 years, Elizabeth; sons, James and John, who is a political cartoonist for the Albuquerque Journal; six grandchildren; and eight great-grandchildren.