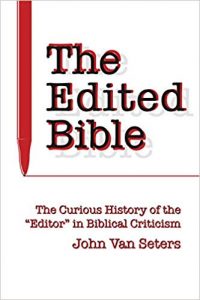 final, definitive and &#8220;canonical&#8221; textual form. So persistent has been this idea since the rise of critical study in the seventeenth century and so pervasive has it become in all aspects of biblical study that there is virtually no reflection on the validity of this idea&#8221; (from the Introduction). Van Seters proceeds to survey the history of the idea of editing, from its origins in the pre-Hellenistic Greek world, through Classical and Medieval times, into the modern era. He discusses and evaluates the implications of the common acceptance of editing and editors/redactors and concludes that this strand of scholarship has led to serious misdirection of research in modern times.