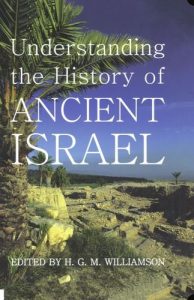 In recent years the study of the history of Ancient Israel has become very heated. On the one hand there are those who continue to use the Bible as a primary source, modified and illustrated by the findings of archaeology, and on the other there are some who believe that primacy should be given to archaeology and that the Biblical account is then seen to be for the most part completely unreliable in historical terms. This volume makes a fresh contribution to this debate by inquiring into the appropriate methods for combining different sorts of evidence-archaeological, epigraphical, iconographical, as well as Biblical. It also seeks to learn from related historical disciplines such as classical antiquity and early Islamic history, where similar problems are faced. The volume features contribution from a strong team of internationally distinguished scholars, frequently in debate with each other, in order to ensure that there is a balance of opinion. Chapters focus on the ninth century BCE (the period of the Omri dynasty) as a test case, but the proposals are of far wider application. The result is a work which brings together in mutually respectful dialogue the representatives of positions which are otherwise in danger of talking across one another. This volume will be essential reading for students and scholars of the Bible, as well as being of great interest to all for whom the Bible is a work of fundamental importance for religion and culture.

:: Hans M Barstad, Professor of Hebrew and Old Testament, University of Edinburgh
The History of Ancient Israel: What Directions Should We Take? 25-48

:: Lester L. Grabbe, Professor of Hebrew Bible and Early Judaism, University of Hull
Some Recent Issues in the Study of the History of Israel 57-67

:: David Ussishkin, Emeritus Professor of Archaeology, University of Tel Aviv
Archaeology of the Biblical Period: On Some Questions of Methodology and Chronology of the Iron Age 131-141

:: Amihai Mazar, Professor of Archaeology, Hebrew University of Jerusalem
The Spade and the Text: The Interaction between Archaeology and Israelite History Relating to the Tenth–Ninth Centuries BCE 143-171

:: Christoph Uehlinger, Professor of the History of Religions, University of Zurich
Neither Eyewitnesses, Nor Windows to the Past, but Valuable Testimony in its own Right: Remarks on Iconography, Source Criticism and Ancient Data-processing 173-228

:: Graeme Auld, Professor of Hebrew Bible, University of Edinburgh
Reading Kings on the Divided Monarchy: What Sort of Narrative? 337-343