FINKELSTEIN, I.; SILBERMAN, N. A. David and Solomon: In Search of the Bible’s Sacred Kings and the Roots of the Western Tradition. New York: The Free Press, 2006, 352 p. 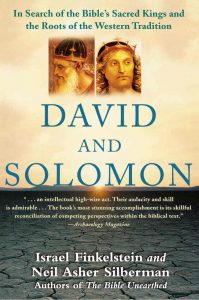 The exploding number of discoveries of biblical archaeology – artifacts and texts found at hundreds of sites populated in the ancient Near East – have shed powerful beams of light on the characters and peoples in the Bible. Most of the resulting public controversies have focused on whether or not the history in the Bible is true. Yet ultimately, there are two larger questions that matter more: exactly how did the Bible evolve into its final form, over the centuries-long process of its compilation, and what does that history tell us about the traditions we have inherited and that still stamp our memories?

In David and Solomon, Israel Finkelstein and Neil Asher Silberman, leading archaeologists and authors who have done a great deal to uncover and understand the breathtaking findings of their field, focus on the first two great kings of the Bible as a lens through which we can see the evolution of the entire biblical era. The Bible’s chapters and verses on David and his son were written in stages, over many hundreds of years, by authors living in very different circumstances. Thanks to a combination of textual analysis and archaeology, we now know a great deal about which parts of the story were written in which era, and why those particular societies might have added to the legend precisely as they did. In short, David and Solomon offers a guide to a thousand years of ancient civilization and the evolution of a tradition of kingly leadership that held sway throughout the West for much of our history.

The earliest folklore and verses about David depict a bandit leader, hiding in the mountains, leading a small gang of traveling raiders (which fits what we know of the ninth century B.C.E.). That bandit may well be the “true” David. In later periods, authors added images of David as a poet, as the founder of a great dynasty, as a political in-fighter, and (perhaps most famously) as a sinner. All of these images made sense for the authors who created them, and a similar evolution of Solomon from the builder of the Temple, to expander of his empire, to wise sage, to rich trader similarly reflects the successive stages of history up to the time of Jesus. Ultimately, David and Solomon came to embody a tradition of divinely inspired kings and even messiahs, the forerunners of Jesus and of the great kings of Europe throughout the Middle Ages.

David and Solomon shows how the stories built around two men reflect the very roots of the western tradition and explains a great deal of why the Bible appears as it does.

Archaeology is today the most important tool at our disposal for reconstructing the evolution of ancient Israelite society. Elsewhere in the ancient world, archaeological

research has also transformed our vision of the past (…) The discrepancies between art and literature, on the one hand, and documented, verifiable history and archaeological evidence, on the other, have made us see the founder myths of antiquity for what they are: shared expressions of ancient communal identity, told with great power and insight, still interesting and worthy of study, but certainly not to be taken as literal, credible records of events.

Such is the case with David and Solomon, who are depicted in the biblical narrative as founding fathers of the ancient Israelite state. Yet we can now say – as we will argue in considerable detail throughout this book – that many of the famous episodes in the biblical story of David and Solomon are fictions, historically questionable, or highly exaggerated. In the following chapters we will present archaeological evidence to show that there was no united monarchy of Israel in the way that the Bible describes it. Although it seems probable that David and Solomon were actual historical characters, they were very different from their scriptural portraits. We will show that it is highly unlikely that David ever conquered territories of peoples more than a day or two’s march from the heartland of Judah. We will suggest that Solomon’s Jerusalem was neither extensive nor impressive, but rather the rough hilltop stronghold of a local dynasty of rustic tribal chiefs. Yet the point of this book is not simply to debunk stories from the Bible. Alone among the great legends of Near Eastern and classical antiquity, the Bible retains its power to inspire hopes and dreams for living communities around the world even today. Our goal is to show how the legends of David and Solomon developed, and how they came to guide western thinking and shape western religious and political traditions in important ways.

As we proceed through the following chapters, we will analyze and attempt to date the various layers of the biblical story, describing the main issues in the now-bitter scholarly disagreements about its historical reliability, and presenting new archaeological evidence that is central to that debate. We will show, step by step, period by period, how the historical reality of ancient Judah – as revealed by archaeological research – gave rise both to a dynasty and to a legend that was transformed and expanded in a process of historical reinterpretation that continues even today.

DUtch Symposium of the Ancient Near East, Leiden 2006: Nomadism, Pastoralism, and Current Research.

This symposium aims to bring various Dutch scholars together, to enhance the scientific-archaeological work carried out by Dutch scholars in the Near East and to bring this work to the attention of the wider, non-scholarly public. We aim to exchange information among project directors, students, colleagues and all those interested in Dutch archaeological research in the countries of today’s Middle East (…) Our speakers include directors of current key archaeological research projects, Assyriologists, and material specialists.Studenten van het Leidse dispuut van archeologie van het nabije Oosten, Nabu Naíd, van de Faculteit Archeologie in Leiden organiseren in 2006 voor de eerste keer het Dutch Symposium of the Ancient Near East (DUSANE). Het symposium indt plaats op zaterdag 11 maart 2006 in Leiden…