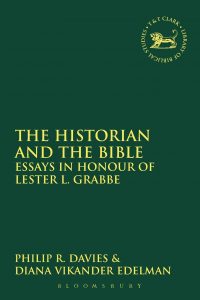 Diz a Editora:
Lester Grabbe is probably the most distinguished, and certainly the most prolific of historians of ancient Judaism, the author of several standard treatments and the founder of the European Seminar on Historical methodology. He has continued to set the bar for Hebrew Bible scholarship. In this collection some thirty of his distinguished colleagues and friends offer their reflections on the practice and theory of history writing, on the current controversies and topics of major interest. This collection provides an opportunity for scholars of high caliber to consider groundbreaking ideas in light of Grabbe’s scholarship and influence. This festschrift offers the reader a unique volume of essays to explore and consider the far-reaching influence of Grabbe on the field of Biblical studies as a whole.

No biblical historian (and surely few biblical scholars) can be unfamiliar with the name of Lester Grabbe. He is undoubtedly the most prolic biblical historian of this, or any preceding generation, and this volume in celebration of his 65th birthday focuses on this major aspect of his work. But he has also made contributions to linguistics (his rst published book [1977] was on “comparative philology”) and later to Hebrew etymology in Philo of Alexandria (1988). He has written Introductions to Leviticus (1993), Ezra–Nehemiah (1998), and the Wisdom of Solomon (1997), as well as studies of Israelite religion and early Judaism (1995, 2000), and edited and contributed volumes on biblical prophecy (2001, 2003, 2004) and on early Judaism (2000). But he is best known for both his histories of Israel, Judah and Judaism and his creation of the European Seminar on Historical Methodology, including his editorship of its numerous volumes—both being too numerous to list!

It was no great challenge to summon contributors to his Festschrift. In these pages is an inventory of those who have worked with Lester and learned from him and his work. He has always tried not only to understand and explain how history should be done but to show by example; and his knowledge of primary and secondary source is unsurpassed.

Lester has been blessed (if that is the word) by being born American (and Texan at that!), but having settled and raised his family in England. He has thereby gained a truly trans-Atlantic experience and—more importantly—character. His pragmatism is certainly Anglo-American, as is his suspicion of philosophical method and belief in the past as a reality to be reconstructed. His humour, modesty and dislike of polemic are perhaps English rather than American, but his vowels have remained entirely faithful to his country of birth.

His contribution to biblical scholarship extends beyond his array of publications, however. For many years he was editor of the Book List of the Society for Old Testament Study, and he was elected the Society’s President in 2009. He was also one of the co-founders of the European Association of Biblical Studies, and deserves much of the credit for sustaining it in its early years, serving as President and then Executive Ofcer. Three co-edited books on prophecy are fruits of his work in the SBL Prophetic Texts and Their Ancient Contexts Group.

Books edited by Lester Grabbe are characterized by careful summaries of their contributions; these (we can testify from personal experience) are circulated to the authors before publication, for Lester cares deeply about such things. His concern for the integrity of the authorial voice accompanies his care for the objectivity of historical facts. If by these virtues he thereby attracts the label of “pre-postmodern,” he will happily wear the badge. Readers of his edited volumes can thus condently scan his Introduction as a preliminary (or substitute) for reading the articles themselves. In this volume, however, we offer the reader no such privilege, both because we doubt we can attain a similar level of objectivity and also because we wish to withhold from the reader any pretext for not savouring a collection of tributes that we trust are worthy of the scholar to whom they are warmly dedicated.

HANS BARSTAD
History and Memory. Some Reflections on the ‘Memory Debate’ in Relation to the Hebrew Bible

NADAV NAAMAN
Text and Archaeology in a Period of Great Decline: The Contribution of the Amarna Letters to the Debate on the Historicity of Nehemiah’s Wall

RAINER ALBERTZ
Secondary Sources Also Deserve to be Historically Evaluated: The Case of the United Monarchy

THOMAS L. THOMPSON
Reiterative Narrative and the Problem of the Exile

ANDRÉ LEMAIRE
Hazor in the Second Half of the 10th Century BCE: Historiography, Archaeology and History

MARIO LIVERANI
The Chronology of the Biblical Fairy-Tale

EHUD BEN ZVI
The Story of Micaiah, son of Imlah: What Could the Ancient Intended Readers Learn from It?

DIANA V. EDELMAN
Of Priests and Prophets and Interpreting the Past: The Egyptian Hm-Ntr and Hry-Hbt and the Judahite nabi’

JOSEPH BLENKINSOPP
Footnotes to the Rescript of Artaxerxes (Ezra 7:11-26)

E. AXEL KNAUF
Biblical References to Judean Settlement in Eretz Israel (and Beyond) in the Late Persian and Early Hellenistic Periods

PHILIP R. DAVIES
The Hebrew Canon and the Origins of Judaism

GEORGE J. BROOKE
What Makes a Text Historical? Assumptions behind the Classification of Some Dead Sea Scrolls