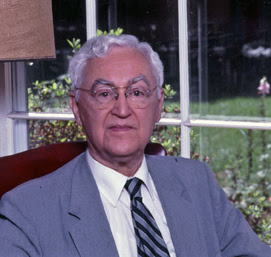 Dr. Bruce M. Metzger, the internationally renowned textual critic, bible scholar, and biblical translator, New Testament professor emeritus at Princeton Theological Seminary, and past President of the SBL (1971), died on February 13, 2007 at his home in Princeton at the age of 93.

Born on February 9, 1914 in Middletown, Pennsylvania, Metzger attended Lebanon Valley College (AB, 1935), where he first studied Greek and textual criticism, and Princeton Theological Seminary (Th.B., 1938, Th.M., 1939), where his teachers included Henry. S. Gehman, W. A. Armstrong, Otto Piper, and Emil Brunner, prior to doctoral studies in classics and patristics at Princeton University (MA, 1940, Ph.D., 1942). He was ordained in 1939 by the Presbytery of New Brunswick (now PC[USA]).

During a forty-six year career at Princeton Theological Seminary (1938-1984), which was capped by his appointment as George L. Collard Professor of New Testament Language and Literature (1964-1984; Emeritus, 1984-), Metzger taught more students than anyone else in the seminary’s history (among them were David Noel Freedman, to mention one of the very first, and Bart Ehrman and myself, to mention two of the last). Metzger was also a visiting scholar or fellow at nine institutions (including Wolfson College, Oxford, Clare College, Cambridge, and the Institute for Advanced Study, Princeton), presented academic lectures at more than one hundred institutions on six continents, and delivered more than 2500 sermons or studies in churches belonging to a wide variety of denominations.

Internationally recognized as a leading NT textual critic, Metzger was arguably the greatest textual specialist and biblical translator America has produced. Among his many publications, pride of place belongs to his trilogy on the text, versions, and canon of the NT. Most widely influential is his handbook on The Text of the New Testament (1964; translations include German, Japanese, Korean, Chinese, Italian, and Russian; 3d, enl. ed. 1992; 4th ed. with Bart Ehrman, 2005), from which multiple generations of textual critics learned their craft. It presented (in a genuinely balanced and pedagogically useful form) the essentials of what would later be termed “reasoned eclecticism,” the dominant approach in the discipline today (his influence with regard to methodology was extended even more widely by A Textual Commentary on the Greek New Testament). Without rival in the field, and an outstanding example of Metzger’s wide-ranging and encyclopedic knowledge, is his Early Versions of the New Testament (1977), which surveys not only the expected major versions, but also many minor ones (e.g., Thracian and Sogdian). The Canon of the New Testament (1987) combines careful and erudite attention to historical matters with a concern for theological questions and implications — another typically Metzgerian characteristic.

Metzger’s recognition as a leading NT textual critic is due also to his influential role as a member of the editorial committee responsible initially for The Greek New Testament and later for the Nestle-Aland Novum Testamentum Graece, and also his involvement in, and leadership of, the International Greek New Testament Project (1948-1984).

The full breadth of Metzger’s scholarship is most visible in his hundreds of articles, which cover textual criticism, philology, palaeography and papyrology, classical topics, Greco-Roman religions, the Hebrew Bible, the Apocrypha, the New Testament, patristics, early church history, and Bible translation (to name only the major areas). In addition he has published (in at least two dozen journals) reviews of hundreds of books written in eight languages. A master of bibliographic detail, Metzger would find that telling reference in sources the rest of us did not know existed (see, e.g., p. 271 n. 28 in the latest edition of the Text of the NT). In a remarkable feat, Metzger published in eight different decades: his first article appeared in 1938, and his most recent book in 2006.

On both academic and popular levels, Metzger was well-known for his involvement (since 1952) with the RSV and especially NRSV translations. From 1977-1990 he was Chair of the Committee of Translators for the NRSV, and was largely responsible for seeing it through the press. His association with the RSV and NRSV was given additional visibility by his editorship of various study Bibles and tools based on these translations, as well as his service as Chair of the Committee on Translation of the American Bible Society 1964-1970. More controversial (he received huge amounts of mail, pro et contra), but quite typical of Metzger’s concern to promote Bible reading, was his editorship of the condensed Reader’s Digest Bible (1982). He took great satisfaction in the expansion of the NRSV to include all the texts viewed as canonical by Roman Catholic, Greek Orthodox, and Protestant Christians, and was pleased to present copies of it to both Pope John Paul II and His All Holiness Demetrios.

Metzger’s many awards, prizes, honors, and academic recognitions include honorary degrees from his alma mater, Findlay College, University of St. Andrews, University of Münster/Westfalia, and University of Potchefstroom; the presidencies of Studorium Novi Testamenti Societas (1971-1972), the Society of Biblical Literature (1971), the North American Patristic Society (1972), and the Society for Textual Scholarship (1995); and three Festschriften. Of particular note are Metzger’s election in 1978 as Corresponding Fellow of the British Academy (its highest honor for those not residents of the UK), and the receipt in 1994 of its prestigious F. C. Burkitt Medal for Biblical Studies (only the third American so honored). As Iain Torrence, the Seminary’s current President, observed, “Bruce Metzger’s sheer brilliance, clarity and Christian devotion set a standard all of his own.”

Yet for all his academic achievements and international renown, Bruce is warmly remembered by many as much or more for his personality and character. Friendly, modest, and self-effacing, seemingly always courteous and gracious, he took a genuine interest in his students, was a source of encouragement to colleagues and younger scholars alike, and deeply enjoyed his many speaking engagements in churches throughout the world. He had a knack of always finding something nice to say about a person or a book, an engaging sense of humor, and an apparently endless supply of amusing anecdotes. Though he tended to avoid talking about himself, he had some remarkable stories to tell (many were finally told in his Reminiscences of an Octogenarian [1997]), some of which were quite endearing: he once admitted, a bit sheepishly, to having studied Syriac vocabulary instead of listening to the lecture in a Christian Education class while a seminary student. Reflective of his character was his distinctive way of formulating advice: once when I was having second thoughts about a project I had agreed to undertake for a publisher, I consulted Bruce, who after listening attentively to the details of the matter, thought for a moment and replied, “Sometimes it’s good not to be too humble” — thereby both encouraging me to “go for it” while simultaneously reminding me to keep the matter in a larger perspective. He will be deeply missed by all who knew him, whether as colleague, teacher, mentor, or friend.

Bruce Metzger is survived by his wife Isobel Elizabeth (daughter of John Alexander Mackay, the third President of the Seminary), and his sons John Mackay Metzger and James Bruce Metzger.

The Israel Antiquities Authority will serve as the leading professional body for the study of the archaeology of Eretz-Israel. It will preserve, conserve and study the archaeological heritage of the country at the highest scientific level, and will maintain a balance between development needs and antiquities preservation.

The Israel Antiquities Authority will aim to increase public awareness and interest in the country’s archaeological heritage.

The Israel Antiquities Authority will encourage the professional capabilities of its employees and their obligations to the organization and its goals.