I incline to the view that the primary purpose, as Matthew tells the origins of Jesus, is for him to prove Jesus’ legal status as the stepson of Joseph, as a legal heir of David.

The passages set in the lectionary for this coming Sunday place alongside each other a prophetic oracle spoken by Isaiah, and an angelic announcement delivered to 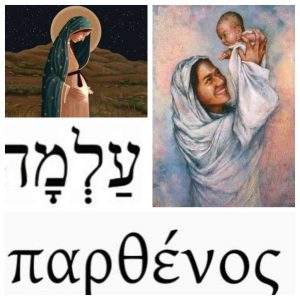 Joseph. The two passages seem to sit side-by-side very comfortably. The Gospel selection from the book of origins recounts how the birth of Jesus the Messiah took place in this way. The prophetic selection from Isaiah declares that the Lord himself will give you a sign and looks to the conception, birth, and naming of a child.

The Hebrew word found in the original oracle of the prophet, almah, refers simply to a young woman of childbearing age; it had no connotation at all relating to virginity. It occurs in eight other places in Hebrew scripture—with reference to Rebekah and Miriam, in three references to female musicians, and in wisdom texts relating simply to young women. In none of those places does it have any reference to the virginity of the young woman.

The Greek translation of these Hebrew texts was made some centuries before Jesus. The translation is known as the Septuagint, attributed to seventy wise scholars. In this translation, the Hebrew word bethulah is usually rendered in Greek as parthenos. This Greek word can refer quite generally to a young woman, but it can have a more specific reference to the virginity of the young woman.

Now, on two occasions in the Septuagint, the word almah is rendered as parthenos: Gen 34:3 and Isa 7:14. The first refers to Dinah. It occurs in the story at the point where the powerful prince Schechem rapes the young woman. The point is being made that her state of virginity has at that point been lost, so the Greek word is appropriate.

But the oracle of Isaiah 7 refers simply to a woman who, at an early stage in her capacity to bear a child, is indeed pregnant. So there appears to be no reference at all to her lack of sexual activity prior to this pregnancy. This much is clear in the Hebrew. But the Septuagint translators chose the Greek word parthenos.

We must wonder: is the choice of parthenos when translating Isa 7:14 from Hebrew a strategic move by the seventy wise scholars? Is it an inspired insight into the meaning of the Hebrew text? Or is it an unguarded moment, a slip of concentration, amongst the translators?

I incline to the latter view. I don’t think the intention of the Septuagint translators was to insist that we know more than what the original prophet knew—that is, the precise sexual status of the young woman in question, not just young, but still a virgin.

Nevertheless, Matthew uses the version of the prophet’s oracle that includes this Greek word. He quotes the Greek version of the Septuagint, since he is writing in Greek. Mind you, Matthew regularly and consistently quotes the Septuagint translation, rather than other options that would have been available to him. So this is not really a surprise.

Whatever identity we accord the author of this book of origins, it is quite clear that he was an educated Jewish male. As such, he would have known and used the scriptures of the people of Israel, in Hebrew. And yet, he is writing his account of Jesus in Greek—so he makes use, on a regular basis, of this version.

And this version places a focus on the virginal status of the young woman, who was to give birth to Jesus of Nazareth. So Matthew has deliberately chosen to include this in his story.

Why? That is a good question! Why?

Rather than seeing Matthew as trying to prove the historical veracity of the virginal status of Mary, however, I incline to the view that the primary purpose, as Matthew tells the origins of Jesus, is for him to prove Jesus’ legal status as the stepson of Joseph, as a legal heir of David. Whilst the infancy narrative in Luke places Mary at the centre of the story—and the angel makes his announcement directly to her—in Matthew’s version it is Joseph who is centre-stage—and the angel speaks to him, and only him, in this version (continua)

My name is John Squires. I live in the Australian Capital Territory. I have been an active participant in the Uniting Church in Australia (UCA) since it was formed in 1977, and was ordained as a Minister of the Word in this church in 1980. I have served in rural, regional, and urban congregations and as a Presbytery Resource Minister and Intentional Interim Minister. For two decades I taught Biblical Studies at a theological college and most recently I was Director of Education and Formation and Principal of the Perth Theological Hall. I’ve studied the scriptures in depth; I hold a number of degrees, including a PhD in early Christian literature. I am committed to providing the best opportunities for education within the church, so that people can hold to an informed faith, which is how the UCA Basis of Union describes it. This blog is one contribution to that ongoing task.