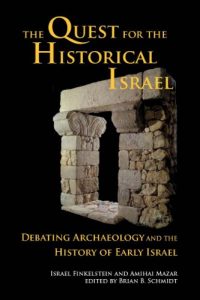 Three decades of dialogue, discussion, and debate within the interrelated disciplines of Syro-Palestinian archaeology, Israelite history, and Hebrew Bible on the question of the relevance of the biblical account for reconstructing early Israel’s history have created the need for a balanced articulation of the issues and their prospective resolutions. This book brings together for the first time and under one cover, the currently emerging “centrist” paradigm as articulated by Israel Finkelstein and Amihai Mazar, two leading figures in the field of early Israelite history and archaeology. Although these two authors advocate distinct views of early Israel’s history, they nevertheless share the position that the material cultural data, the biblical traditions, and the ancient Near Eastern written sources are all significantly relevant to the historical quest for Iron Age Israel. The results of their research are featured here in accessible, parallel syntheses of the historical reconstruction of early Israel with the aim of facilitating comparison and contrast of their respective interpretations. The two histories presented in Quest are based on invited lectures the authors delivered in October 2005 at the International Institute for Secular Humanistic Judaism’s Sixth Biennial Colloquium in Detroit, Michigan.