The history of the Land of Israel over the last few thousand years has been fraught with upheavals and wars, and the arrival and disappearance of many peoples. A recently published study raises the possibility of a different kind of cause for shifting settlement patterns in the land some 5,500 years ago: Climate change led to the flooding of the coastal plain (which had been a populated commercial and settlement center) and the creation of many swamps.

The concentration of population, commerce and trade in Israel’s coastal plain is not a phenomenon unique to our era. Even before the events the Bible describes in the Land of Israel, during the early first Bronze Age, 5,500 years ago, numerous communities dotted the coastal strip, from the vicinity of Gaza to the Galilee. The first royal dynasties appeared around that time in Egypt, and clay vessels uncovered in southern coastal communities indicate that the area (apparently under Egyptian control) served as an important trade route for the Egyptians.

And then, 5,500 years ago, say the archaeologists, there was a dramatic change. The coastal region was almost completely abandoned while concurrently in other areas an urban revolution was underway, with large fortified cities being built. After the era of urban, commercial prosperity, for almost a thousand years, the coastal plain mostly contained but a few small and scattered communities.

“The phenomenon is amazing,” says archaeologist Dr. Avraham Faust, director of Bar-Ilan University’s Institute of Archaeology. “There was a fairly large population in the coastal plain, and at the end of a relatively short process it emptied almost completely. In the alluvial areas, nearly all of the communities disappeared. The Egyptians also abandoned the coastal plain and trade no longer passed that way.”

Faust adds: “The key question that engaged us is why? What caused the community to disappear?” His research with Dr. Yosef Ashkenazy, a climate researcher at Ben-Gurion University of the Negev, suggests a comprehensive explanation of the phenomenon: The Canaanite coastal settlements were abandoned in the face of environmental change. Increased precipitation led to the flooding of parts of the coastal plain and to a rise in the level of groundwater, which eventually resulted in the spread of swamps, and that apparently caused the residents to leave the area.

The two researchers’ article appeared recently in the journal Quarternary Research. As part of the study, Faust and Ashkenazy compared the archaeological findings on the thinning of communities in the coastal region with data indicating a rise in precipitation in the relevant period. Among other things, the researchers rely on measurements of precipitation during earlier eras, taken from the Nahal Sorek stalagmites, and evidence of changes in the level of the Dead Sea.

According to Faust, the limestone ridges of the coastal plain blocked the flow of surging rivers, creating a drainage problem, and the swelling waters caused swamps to appear specifically in this area. There are findings that indicate a peak level of swamps in this era, says Faust. Excavations in Tel Aviv, at the Exhibition Grounds, uncovered a settlement that was abandoned a little after 3000 BCE. It was covered by a layer of dark soil that proved to contain “a very high percentage of swamp flora,” says Faust.

One of the most interesting findings, indicating the likeliness of swamps in the coastal region, is the relative abundance of hippopotamus bones uncovered in excavations. Hippopotamuses thrived in the Land of Israel during prehistoric times and are identified as the “behemoths” mentioned in the Bible. The substantial evidence of an increased hippopotamus population indicates these animals came to enjoy more hospitable living conditions, i.e., more swamps, attesting to higher humidity levels.

Faust and Ashkenazy’s study considers the unexpected and considerable impact that climate change can have on a population. “It is usually believed that only a drop in precipitation leads to the abandonment of settlements,” say the researchers. “We are trying to show that an increase in precipitation can also have an impact.” 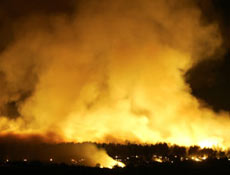