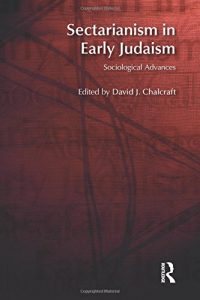 Diz a editora:
This book presents eight new and path-breaking studies which explore the phenomenon of sects in ancient Judaism and the history of sociological theorizing of sectarian movements. Contributors draw on a full range of classical and contemporary sources in the sociology religion including the work of Max Weber, Ernest Troeltsch, Bryan Wilson, Stark and Bainbridge, Mary Douglas. The book represents a self-conscious foregrounding of sociological issues which the authors apply to their deep knowledge of the history and texts of the so-called sectarian communities. Critical consideration is given to the contexts in which Jewish sectarianism is to be understood, layers of redaction in the texts, the trajectories of sectarian groups, the location of sectarianism within a long term history of Judaism as well as in the context of the Second Temple; the relations between sects and the wider society, between themselves and between other religious and political movements are considered. Critical approaches are adopted to the reception and application of Weber’s ideas and for the first time a comprehensive survey of the contributions of Weber and Bryan Wilson, rooted in the development of their own work across time, is provided. The limits as well as the potentialities of their typologies and sociological theories are considered. Overall the book breaks out of a non reflective and non informed use of sociological typologies to ground conceptualization of sects and their histories in a purposeful sociological context, making controlled use of sociological theory, concepts and substantive findings of other sectarian movements. The book does not argue for any one sociological method or typology but only leads by example by showing the need to be cautious with the use of comparative material, and to ground theorizing in the very texts of the sociological theorist studied just as careful attention needs to be paid to the textual, historical and material evidence that remains.

“False report, of course, is the culture in which blogging thrives”. R. Joseph Hoffmann.

:: Introducing The Jesus Project by R. Joseph Hoffmann – Presidente do Committee for the Scientific Examination of Religion (CSER)

:: The Jesus Project – The Forbidden Gospels Blog, by April DeConick

:: Hoffmann Responds to blogdom on The Jesus Project – Thoughts on Antiquity, by Chris Zeichmann

:: The Jesus Project: on not being responsible – Metacatholic, by Doug Chaplin

The Jesus Project, announced in December 2007, was intended as a five-year investigation to examine whether Jesus existed as a historical figure. The idea was that a group of 32 scholars from a variety of disciplines would meet regularly with no preconceived ideas, funded by the Committee for the Scientific Examination of Religion, part of the Center for Inquiry.

Initiated by historian of religion R. Joseph Hoffmann, chair of the Committee, the project sought to improve upon what Hoffmann saw as the failure of the Jesus Seminar to determine what, if anything, can be recovered about Jesus, using the highest standards of scientific and scholarly enquiry. The Committee suspended the project’s funding in June 2009, after Hoffmann expressed concern about its purpose and direction and it has not been active since then.

The project was halted in June 2009 when Hoffmann announced that in his view the project was not productive, and its funding was suspended. He wrote that there were problems with adherents to the Christ myth theory, the idea that Jesus did not exist, asking to set up a separate section of the project for those committed to the theory, which Hoffmann felt signalled a lack of necessary skepticism. He was also concerned that the media was sensationalizing the project, with the only newsworthy conclusion being that Jesus had not existed, a conclusion he said most participants would not have reached.

He also argued that New Testament documents, particularly the Gospels, were written at a time when the line between natural and supernatural was not clearly drawn, and concluded that further historical research was not realistic. “No quantum of material discovered since the 1940’s, in the absence of canonical material, would support the existence of an historical founder,” he wrote. “No material regarded as canonical and no church doctrine built upon it in the history of the church would cause us to deny it. Whether the New Testament runs from Christ to Jesus or Jesus to Christ is not a question we can answer.” (Wikipedia, Jesus Project)