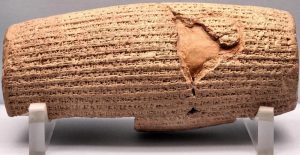 [When …] … [… wor]ld quarters […] … a low person was put in charge of his country, but he set [a (…) counter]feit over them. He ma[de] a counterfeit of Esagil [and …] … for Ur and the rest of the cult-cities. Rites inappropriate to them, [impure] fo[od- offerings …] disrespectful […] were daily gabbled, and, intolerably, he brought the daily offerings to a halt; he inter[fered with the rites and] instituted […] within the sanctuaries. In his mind, reverential fear of Marduk, king of the gods, came to an end. He did yet more evil to his city every day; … his [people…], he brought ruin on them all by a yoke without relief. Enlil-of-the-gods became extremely angry at their complaints, and […] their territory. The gods who lived within them left their shrines, angry that he had made them enter into Babylon (Shuanna). Ex[alted Marduk, Enlil-of-the-Go]ds, relented. He changed his mind about all the settlements whose sanctuaries were in ruins and the population of the land of Sumer and Akkad who had become like corpses, and took pity on them. He inspected and checked all the countries, seeking for the upright king of his choice. He took under his hand Cyrus, king of the city of Anshan, and called him by his name, proclaiming him aloud for the kingship over all of everything. He made the land of the Qutu and all the Medean troops prostrate themselves at his feet, while he looked out in justice and righteousness for the black-headed people whom he had put under his care. Marduk, the great lord, who nurtures his people, saw with pleasure his fine deeds and true heart and ordered that he should go to Babylon He had him take the road to Tintir, and, like a friend and companion, he walked at his side. His vast troops whose number, like the water in a river, could not be counted, marched fully-armed at his side. He had him enter without fighting or battle right into Shuanna; he saved his city Babylon from hardship. He handed over to him Nabonidus, the king who did not fear him. All the people of Tintir, of all Sumer and Akkad, nobles and governors, bowed down before him and kissed his feet, rejoicing over his kingship and their faces shone. The lord through whose trust all were rescued from death and who saved them all from distress and hardship, they blessed him sweetly and praised his name.

When I went as harbinger of peace i[nt]o Babylon I founded my sovereign residence within the palace amid celebration and rejoicing. Marduk, the great lord, bestowed on me as my destiny the great magnanimity of one who loves Babylon, and I every day sought him out in awe. My vast troops marched peaceably in Babylon, and the whole of [Sumer] and Akkad had nothing to fear. I sought the welfare of the city of Babylon and all its sanctuaries. As for the population of Babylon […, w]ho as if without div[ine intention] had endured a yoke not decreed for them, I soothed their weariness, I freed them from their bonds(?). Marduk, the great lord, rejoiced at [my good] deeds, and he pronounced a sweet blessing over me, Cyrus, the king who fears him, and over Cambyses, the son [my] issue, [and over] my all my troops, that we might proceed further at his exalted command. All kings who sit on thrones, from every quarter, from the Upper Sea to the Lower Sea, those who inhabit [remote distric]ts (and) the kings of the land of Amurru who live in tents, all of them, brought their weighty tribute into Shuanna, and kissed my feet. From [Shuanna] I sent back to their places to the city of Ashur and Susa, Akkad, the land of Eshnunna, the city of Zamban, the city of Meturnu, Der, as far as the border of the land of Qutu – the sanctuaries across the river Tigris – whose shrines had earlier become dilapidated, the gods who lived therein, and made permanent sanctuaries for them. I collected together all of their people and returned them to their settlements, and the gods of the land of Sumer and Akkad which Nabonidus – to the fury of the lord of the gods – had brought into Shuanna, at the command of Marduk, the great lord, I returned them unharmed to their cells, in the sanctuaries that make them happy. May all the gods that I returned to their sanctuaries, every day before Marduk and Nabu, ask for a long life for me, and mention my good deeds, and say to Marduk, my lord, this: “Cyrus, the king who fears you, and Cambyses his son, may their … […] […….].” The population of Babylon call blessings on my kingship, and I have enabled all the lands to live in peace. Every day I copiously supplied [… ge]ese, two ducks and ten pigeons more than the geese, ducks and pigeons […]. I sought out to strengthen the guard on the wall Imgur-Enlil, the great wall of Babylon, and […] the quay of baked brick on the bank of the moat which an earlier king had bu[ilt but not com]pleted, [I …] its work. [… which did not surround the city] outside, which no earlier king had built, his troops, the levee from his land, in/to Shuanna. […] with bitumen and baked brick I built anew, and completed its work. […] great [doors of cedarwood] with copper cladding. I installed all their doors, threshold slabs and door fittings with copper parts. […] I saw within it an inscription of Ashurbanipal, a king who preceded me, […] … […] … [… for] ever.