Myth as Story and Metaphor in the Hebrew Bible

Allow me to begin with a bold claim that I can only begin to defend in this blog: Myth constitutes a vital part of the Hebrew Bible; it powerfully shapes the contours of biblical language, its various narratives, and theologies. That is, myth deeply defines what we might call the biblical world – populates the landscape with mythic monsters and deities and animates that world in which the God of Israel rises against forces of evil and, through victorious battle, creates order, erects his temple, and establishes his kingship.

Some readers will find the above claim objectionable. For example, some may argue that the Hebrew Bible is itself polemical against myth and instead espouses monotheism and a historical conception of reality. Yhwh, the God of Israel, the argument might go, says, “I am the First, and I am the Last; there is no god but me” (Isa 44:6). If there is but one God according to the Hebrew Bible, how can it contain myths with their many gods? And Yhwh delivers Israel in historical time, out of slavery, out of Egypt. If God acts in history, what need is there for myth?

Yet, we find fragments of myth throughout the pages of the Hebrew Bible, interwoven into genuine memories of the past, faithful representations of the present, and sincere hopes for the future. What more? Careful study reveals that myth shapes the biblical view of history in toto and thus the very reality in and through and toward which biblical writers lived. That is, we find that myth in the Hebrew Bible has not only to do with expression but also with being. Myth, it can be argued, constitutes a vital, even a foundational, part of the Hebrew Bible and the biblical world.

That fragments of myth can be found in the Hebrew Bible is clear to anyone who has read it. That these fragments in fact give shape to the narrative plot of pivotal moments in the Hebrew Bible may come as a surprise to some. What more, we have only begun to understand the ways in which myth animates the biblical vision of the world – the foundational events of creation and exodus and the ongoing hope for redemption out of the conditions of exile and the cataclysm of the eschaton.

This book examines the long-debated issue of the relationship between the Hebrew Bible and ancient Near Eastern myths. Using an innovative, interdisciplinary 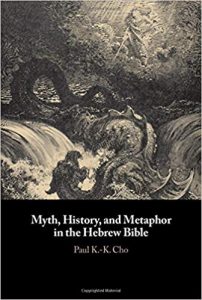 Paul K.-K. Cho is an assistant professor of Hebrew Bible at Wesley Theological Seminary, Washington, DC. His interests center on the interpretation of the Hebrew Bible, with emphasis on its literary texture and modes of producing meaning, particularly as they relate to the innovation and creation of worldviews and theologies.

The Structure of Heaven and Earth: How Ancient Cosmology Shaped Everyone’s Theology

The Bible is often difficult to make sense of without the proper conceptual framework. Why is Paul concerned about mysterious angels, principles, powers, forces, and archons in his epistles? Why are interactions with demons at the forefront of Jesus’ ministry in Mark? Why is heaven sometimes described as having different levels? Why does Paul describe people under the law as being enslaved to the elements? What motivated early Christians to worship a heavenly saviour? It’s hard to answer these questions without a detailed understanding of ancient Jewish and Greek cosmology, so I’ve spent a great deal of time reading the best books I can find on the subject. Much of what I learned surprised me; perhaps it will surprise you too.