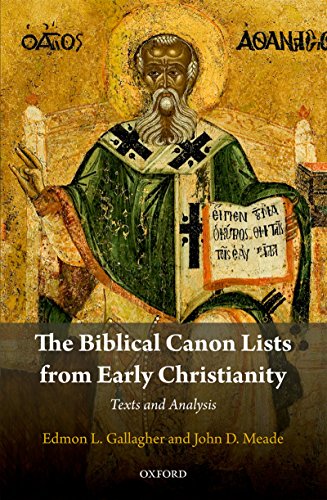 The Bible took shape over the course of centuries, and today Christian groups continue to disagree over details of its contents. The differences among these groups typically involve the Old Testament, as they mostly accept the same 27-book New Testament. An essential avenue for understanding the development of the Bible are the many early lists of canonical books drawn up by Christians and, occasionally, Jews. Despite the importance of these early lists of books, they have remained relatively inaccessible. This comprehensive volume redresses this unfortunate situation by presenting the early Christian canon lists all together in a single volume. The canon lists, in most cases, unambiguously report what the compilers of the lists considered to belong to the biblical canon. For this reason they bear an undeniable importance in the history of the Bible.

The Biblical Canon Lists from Early Christianity provides an accessible presentation of these early canon lists. With a focus on the first four centuries, the volume supplies the full text of the canon lists in English translation alongside the original text, usually Greek or Latin, occasionally Hebrew or Syriac. Edmon L. Gallagher and John D. Meade orient readers to each list with brief introductions and helpful notes, and they point readers to the most significant scholarly discussions. The book begins with a substantial overview of the history of the biblical canon, and an entire chapter is devoted to the evidence of biblical manuscripts from the first millennium. This authoritative work is an indispensable guide for students and scholars of biblical studies and church history.

The authors’ primary purpose is to lay before readers a collection of early evidence about what writings were treated as part of a canon, focusing on evidence of the first four centuries.  So, the main part of the book is given to setting out this evidence:  Jewish canon lists (chap 2), Greek Christian canon lists (chap. 3), Latin Christian lists (chap. 4), the Syriac Christian list (chap. 5), and a discussion of the writings included in selected Greek, Syriac, Latin, and Hebrew Manuscripts (chap. 6).  An Appendix gives brief information on a number of other writings that are mentioned in early sources but did not get included in either Jewish or (some) Christian canons.

The major benefit of this book is that, for each list included, the authors give a brief introduction, and the actual text in the original language and with an English translation, plus copious notes.  In one handy volume, you have pretty much all the key evidence, which makes this volume a unique contribution.