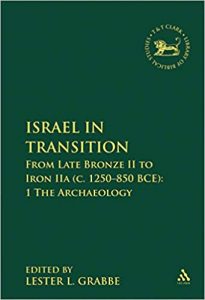 For more than a decade the European Seminar in Historical Methodology has debated the history of ancient Israel (or Palestine or the Southern Levant, as some prefer). A number of different topics have been the focus of discussion and published collections, but several have centered on historical periods. The really seminal period–one of great debates over a number of different topics–is the four centuries between the Late Bronze II and Iron IIA, but it seemed appropriate to leave it toward the end of the various historical periods. It was also important to give a prominent place to archaeology, and the best way to do this seemed to be to have a special Seminar session devoted entirely to archaeology

Israel in Transition 2 is the second in a two-volume work addressing some of the historical problems relating to the early history of Israel, from its first mention around 1200 BCE to the beginnings of the kingdoms of Israel and Judah. During this four century transition period Israel moved from a group of small settlements in the Judean and Samarian hill country to the two kingdoms of Israel and Judah, occupying much of the land on the west side of the Jordan. 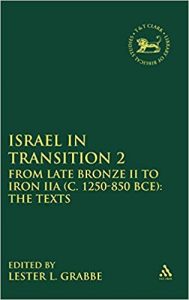 examination of the biblical text. The articles discuss various individual problems relating to Israelite history, but ultimately the aim is to comment on historical methodology.

The debate among Seminar members illustrates not only the problems but also suggests solutions and usable methods. The editor provides a perspective on the debate in a Conclusion that summarizes the contributions of the two volumes together. 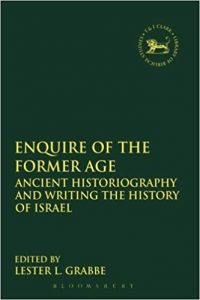 When methodology relating to the history of ancient Israel is discussed, the issue of historiography is frequently injected into the debate. This includes both principles of writing history from a modern perspective and also historiography as it relates to ancient writings. The first part of this most recent volume in the European Seminar in Historical Methodology series contains essays on historiography, including such well-known scholars as Ehud Ben Zvi, Philip Davies, and Axel Knauf. The second part is made up of reviews of histories of Israel or related works by such writers as William Dever, Baruch Halpern, Steven McKenzie, Mario Liverani, Alberto Soggin, Lester Grabbe, Jens Bruun Kofoed, and Iain Provan, V. Phillips Long, and Tremper Longman, III. Reviewers include Rainer Albertz, Niels Peter Lemche, Joseph Blenkinsopp, Philip Davies, Bob Becking, Ehud Ben Zvi, and Lester Grabbe. The original authors had the opportunity to respond to the reviews, while the editor provides an introduction that summarizes the various contributions and a conclusion that provides personal reflections on the debate.