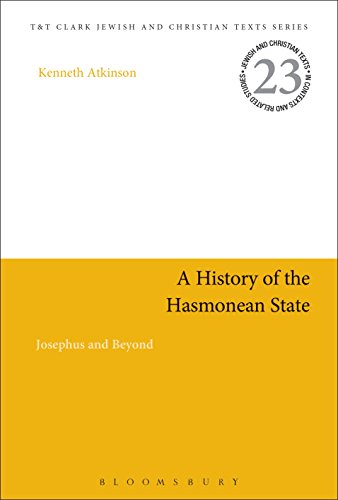 Kenneth Atkinson tells the exciting story of the nine decades of the Hasmonean rule of Judea (152 – 63 BCE) by going beyond the accounts of the Hasmoneans in Josephus in order to bring together new evidence to reconstruct how the Hasmonean family transformed their kingdom into a state that lasted until the arrival of the Romans.

Atkinson reconstructs the relationships between the Hasmonean state and the rulers of the Seleucid and the Ptolemaic Empires, the Itureans, the Nabateans, the Parthians, the Armenians, the Cappadocians, and the Roman Republic. He draws on a variety of previously unused sources, including papyrological documentation, inscriptions, archaeological evidence, numismatics, Dead Sea Scrolls, pseudepigrapha, and textual sources from the Hellenistic to the Byzantine periods.

Atkinson also explores how Josephus’s political and social situation in Flavian Rome affected his accounts of the Hasmoneans and why any study of the Hasmonean state must go beyond Josephus to gain a full appreciation of this unique historical period that shaped Second Temple Judaism, and created the conditions for the rise of the Herodian dynasty and the emergence of Christianity.

Kenneth Atkinson is Professor of History at the University of Northern Iowa, Cedar Falls, IA, USA.

A History of the Hasmonean State: Josephus and Beyond – By Kenneth Atkinson

Josephus cautiously avoided messianism in his history of the Hasmonean period. He appears to have been reluctant to document any Hasmonean history that involved the violent messianism of the type that had contributed to the outbreak of the First Jewish War. Instead, he stresses that the Hasmonean family’s rule had gone well until they had established a monarchy and allowed sectarian factions to inﬂuence politics. Josephus wrote his books partly to support the aristocracy, namely the rule of the Pharisees and their leaders. For Josephus, these groups represented caution and Roman aristocratic values. They were opposed to the religious zeal of the Zealots and related Jewish groups that had caused the rebellion against Rome. For Josephus, the priests and the aristocrats were the only legitimate Jewish leaders.