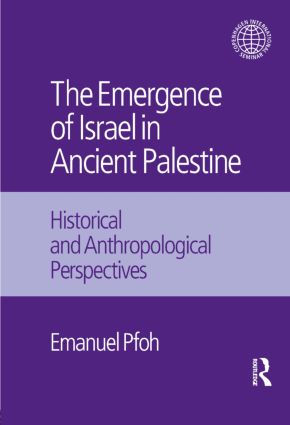 Taking advantage of critical methodology for history-writing and the use of anthropological insights and ethnographic data from the modern Middle East, this study aims at providing new understandings on the emergence of Israel in ancient Palestine and the socio-political dynamics at work in the Levant during antiquity. The book begins with a discussion of matters of historiography and history-writing, both in ancient and modern times, and an evaluation on the incidence of the modern theological discourse in relation to history and history-writing. Chapter 2 evaluates the methodology used by biblical scholars for gaining knowledge on ancient Israelite society. Pfoh argues that such attempts often apply socio-scientific models on biblical narratives without external evidence of the reconstructed past, producing a virtual past reality which cannot be confirmed concretely. Chapter 3 deals with the archaeological remains usually held as clear evidence of Israelite statehood in the tenth century BCE. The main criticism is directed towards archaeological interpretations of the data which are led by the biblical narratives of the books of Judges and Samuel, resulting in a harmonic blend of ancient literature and modern anthropological models on state-formation. Chapter 4 continues with the discussion on how anthropological models should be employed for history-writing. Socio-political concepts, such as chiefdom society or state formation should not be imposed on the contents of ancient literary sources (i.e., the Bible) but used instead to analyse our primary sources (the archaeological and epigraphic records), in order to create a socio-historical account. The final chapter attempts to provide an historical explanation regarding the emergence of Israel in ancient Palestine without relying on the Bible but only on archaeology, epigraphy and anthropological insights. This Israel is not the biblical one. This is the Israel from history, the one that the modern historian aims at recovering from the study of ancient epigraphic and archaeological remains. The arguments presented challenge the idea that the biblical writers were recording historical events as we understand this practice nowadays and that we can use the biblical records for creating critical histories of Israel in ancient Palestine. It also questions the existence of undisputable traces of statehood in the archaeological record from the Iron Age, as the biblical images about a United Monarchy might lead us to believe. Thus, drawing on ethnographic insights, we may gain a better knowledge on how ancient Levantine societies functioned, providing us with a context for understanding the emergence of historical Israel as a major highland patronate, with a socio-political life of almost two centuries. It is during the later periods of ancient Palestines history, the Persian and the Graeco-Roman, that we find the proper context into which biblical Israel is created, beginning a literary life of more than two millennia.