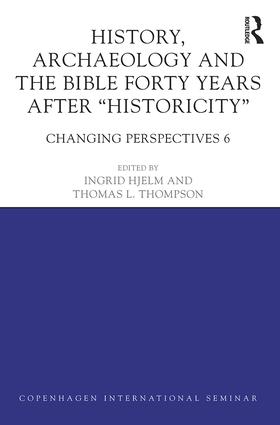 In History, Archaeology and the Bible Forty Years after “Historicity”, Hjelm and Thompson argue that a ‘crisis’ broke in the 1970s, when several new studies of biblical history and archaeology were published, questioning the historical-critical method of biblical scholarship. The crisis formed the discourse of the Copenhagen school’s challenge of standing positions, which—together with new achievements in archaeological research—demand that the regional history of ancient Israel, Judaea and Palestine be reconsidered in all its detail. This volumeexamines the major changes that have taken place within the field of Old Testament studies since the ground breaking works of Thomas Thompson and John van Seters in 1974 and 1975 (both republished in 2014). The book is divided in three sections: changing perspectives in biblical studies, history and cult, and ideology and history, presenting new articles from some of the field’s best scholars with comprehensive discussion of historical, archaeological, anthropological, cultural and literary approaches to the Hebrew Bible and Palestine’s history. The essays question: “How does biblical history relate to the archaeological history of Israel and Palestine?” and “Can we view the history of the region independently of a biblical perspective?” by looking at the problem from alternative angles and questioning long-held interpretations.

Lost and Found? A Non-Jewish Israel from the Merneptah Stele to the Byzantine Period

Article from History, Archaeology and The Bible Forty Years After “Historicity”. By Ingrid Hjelm – Faculty of Theology University of Copenhagen – The Bible and Interpretation: March 2016