Those Elusive Sons of God: Genesis 6:1–4 Revisited – By Jaap Doedens – The Bible and Interpretation – April 2019

Since the beginning of the 20th century, and especially after the numerous discoveries of similar expressions in extrabiblical texts, mainstream exegesis returned to a ‘superhuman’ interpretation of the ‘sons of God’ in Gen 6:1–4. Yet now they were not viewed as (fallen) angels, but as ‘divine beings’, or deities (…) This newer exegetical solution is most probably the correct one.

Is it possible to discover an historical kernel of this narrative about marriages of divine beings and human women resulting in the birth of giant heroes? The origin of this narrative could perhaps be connected with the presence of megalithic tombs, mainly in the Transjordan region, the so called dolmens, dating from the end of the third and the beginning of the second millennium BCE. It is reasonable  that, because of their mere size, these monumental structures gave rise to tales about giant fallen warriors. Somehow, one of these tales made its way into the biblical narrative, and became part of a theological framework elucidating humanity’s fate with all its trial and error. 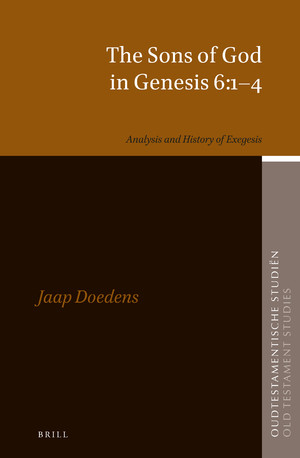 In The Sons of God in Genesis 6:1–4, Jaap Doedens offers an overview of the history of exegesis of the enigmatic text about the ‘sons of God’, the ‘daughters of men’, and the ‘giants’. First, he analyzes the text of Gen 6:1–4. Subsequently, he tracks the different exegetical proposals from the earliest exegesis until those of modern times. He further provides the reader with an evaluation of the meaning of the expression ‘sons of God’ in the Old Testament and the Ancient Near East. In the last chapter, he concentrates on the message and function of Gen 6:1–4. This volume comprehensively gathers ancient and modern exegetical attempts, providing the means for an ongoing dialogue about this essentially complex and elusive passage.

1 Setting the Course: Introduction
1 From Boulder to Keystone to Stumbling Block
2 The Mainstream Solutions
3 Approach

Jaap Doedens, Ph.D. Kampen Theological University (2013), Pápa Reformed Theological Seminary, Pápa, Hungary, is college associate professor at the latter seminary. He has published articles on the Old Testament, the intertestamental period, and the New Testament in English, Dutch, and Hungarian