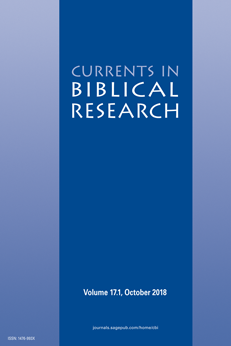 The study of dreams and their interpretation in the literary remains from antiquity have become increasingly popular access points to the phenomenological study of religious experience in the ancient world, as well as of the literary forms in which this experience was couched. This article considers the phenomenon of dreaming in the Hebrew Bible and ancient Jewish literature. I consider treatments of these dream accounts, noting the development in the methodological means by which this material has been approached, moving from source criticism, to tradition history, and finally to form-critical methods. Ultimately, I will argue that form criticism in particular enables scholars to discern shifts and developments across diachronic perspectives. Study of dream accounts is thus illuminating not only for the understanding of dream phenomena, but also for the development of apocalyptic and the method and means of early Jewish biblical interpretation.

This article surveys developments in the study of the histories of ancient Israel and Judah with a focus on the last ten years. Over that period there has been an increased focus on extrabiblical evidence, over biblical text, as the primary means of constructing comprehensive histories, and a revival of interest in post-modern and linguistic-turn theories with respect to establishing what kinds of histories should be written. This study offers a general discussion of the last decade’s trends; an inquiry into the possibility that Judahite authors only assumed an Israelite identity after the fall of Israel; and an era-by-era investigation of particular developments in how scholars think about the various traditional periods of Israelite and Judahite history. The latter inquiry spans the pre-monarchical period to the Persian period.

Do the Synoptic passion narratives portray Jesus (and Barabbas) as one (or both) of the goats of the Day of Atonement? This question currently has no consensus in biblical scholarship but four contrasting positions: The evangelists portray (1) Jesus as the abused scapegoat in his maltreatment by the Roman soldiers (Mk 15.16-20 parr.); (2) Jesus as a pharmakos-like scapegoat patterned after Hellenistic motifs of redemptive suffering; (3) Barabbas as the scapegoat and Jesus as the immolated goat (Mt. 27.15-26 parr.); and (4) Jesus as neither goat, but the typological fulfillment of alternative (suffering) figures: Isaiah’s Servant, the Psalms’ Righteous Sufferer, the Son of Man, and the divine warrior. This article reviews and evaluates these four positions, suggesting avenues for future research.

The study of the military in the Roman provinces of Judaea is not the most accessible topic. Though the data upon which scholars rely is familiar (e.g., epigraphs, papyri, ancient historians), its study requires significant methodological deviations from biblical studies. This article summarizes key points relevant for scholars of both Jewish antiquity and early Christianity. First, it provides a summary of recent developments in the social history of the Roman army in the Near East, attending especially to the question of the role and function of soldiers in that region. Second, this article provides a brief social history for all military units in Judaea before it was renamed Syria Palaestina in 130 ce (four legions, 14 infantry cohortes, and five cavalry alae), based on the latest discoveries. Finally, the article concludes with a section discussing two issues specific to New Testament studies: the presence of an Italian cohort in Judaea (Acts 10) and the issue of the Augustan cohort in Judaea and Batanaea (Acts 27).

This peer-reviewed journal summarizes the spectrum of recent research on particular topics or biblical books. Each article provides an inclusive treatment of its subject, without in most cases being exhaustive. Articles cover specific biblical books or clusters of books, ancillary ancient literature, archaeology, historical studies, as well as new and developing areas of study. Each article concludes with an extensive bibliography that provides a basic knowledge of significant articles and books on the topic being treated, and provides sufficient information to launch a thorough investigation of the topic.