There is no official tally of the number of ancient Mesopotamian cuneiform tablets held by the world’s museums, but experts agree that there are roughly half a million. The largest collection by far is in the possession of the British Museum, in London, which has approximately 130,000 of them. Next, in roughly descending order, are Berlin’s Vorderasiatisches Museum, the Louvre in Paris, the Museum of Ancient Orient in Istanbul, the Baghdad Museum and Yale University’s Babylonian Collection, which, with 40,000 tablets, has the largest holding in the United States. A close second is the University of Pennsylvania’s Museum of Archaeology and Anthropology. 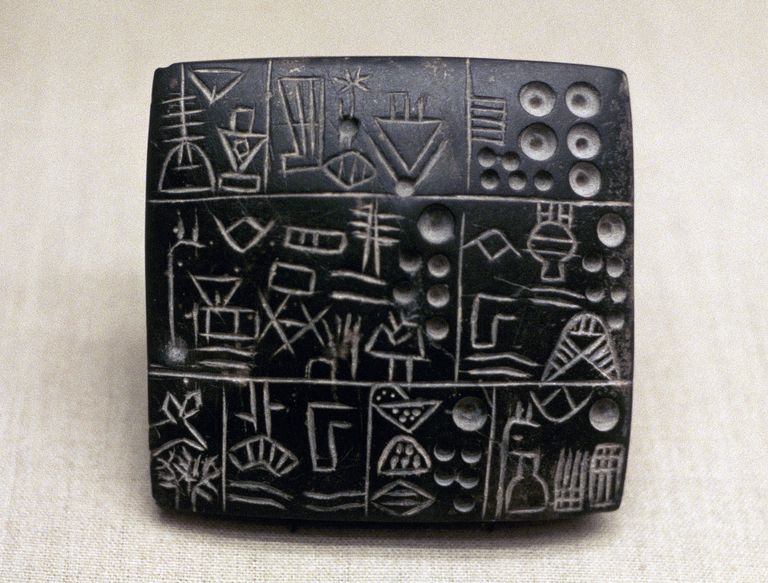 :: A Short History of Proto-Cuneiform
The earliest true script in man’s history emerged at the end of the fourth millennium B.C. in ancient Babylonia, the southern part of today’s Iraq… The most prominent archaeological site of the Late Uruk period is the ancient city of Uruk.

:: The Origins of Writing
Recent archaeological research indicates that the origin and spread of writing may be more complex than previously thought. Complex state systems with proto-cuneiform writing on clay and wood may have existed in Syria and Turkey as early as the mid-fourth millennium B.C. If further excavations in these areas confirm this assumption, then writing on clay tablets found at Uruk would constitute only a single phase of the early development of writing. The Uruk archives may reflect a later period when writing “took off” as the need for more permanent accounting practices became evident with the rapid growth of large cities with mixed populations at the end of the fourth millennium B.C. Clay became the preferred medium for recording bureaucratic items as it was abundant, cheap, and durable in comparison to other mediums. Initially, a reed or stick was used to draw pictographs and abstract signs into moistened clay. Some of the earliest pictographs are easily recognizable and decipherable, but most are of an abstract nature and cannot be identified with any known object. Over time, pictographic representation was replaced with wedge-shaped signs, formed by impressing the tip of a reed or wood stylus into the surface of a clay tablet. Modern (nineteenth-century) scholars called this type of writing cuneiform after the Latin term for wedge, cuneus.

:: Cuneiform Collections
Since their discovery some 150 years ago cuneiform tablets have been discovered in both controlled and un-controlled excavations, and have been dispersed across the globe.

:: Proto-Cuneiform – Earliest Form of Writing on Planet Earth
The earliest proto-cuneiform comes from the earliest layers at the temple of Eanna in Uruk, dated to the Uruk IV period, about 3200 BC.