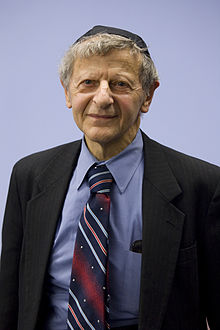 FELDMAN, LOUIS H. (1926– ), U.S. professor of classics and literature. Born in Hartford, Connecticut, Feldman received his undergraduate degree from Trinity College in 1946, and his master’s degree in 1947; his doctoral degree in classical philology is from Harvard University (1951).

He was a teaching fellow at Trinity in 1951 and 1952, then an instructor in classics in 1952 and 1953. He was an instructor at Hobart and William Smith Colleges from 1953 to 1955, then joined Yeshiva University of New York as an instructor in humanities and history. He was an assistant professor at Yeshiva University from 1956 to 1961, an associate professor from 1961, and he was appointed a professor of classics in 1966. He subsequently became the Abraham Wouk Family Professor of Classics and Literature.

Feldman is renowned as a scholar of Hellenistic civilization, specifically of the works of Josephus.

H-Judaic is deeply saddened to learn [from Dr Edward Reichman and Menachem Butler] of the passing of Professor Louis Feldman (1926-2017), the Abraham Wouk Family Professor of Classics and Literature at Yeshiva University, where Prof. Feldman taught for some 60 years.  Prof. Feldman was recognized around the world as the “Dean” of Josephus scholars and contributed greatly to our understanding of Jewish life during the Hellenistic era. He published numerous books and hundreds of articles — 243 are listed in RAMBI. He was a “scholar’s scholar” — a model of dedication to craft coupled with modesty and wide-ranging learning.