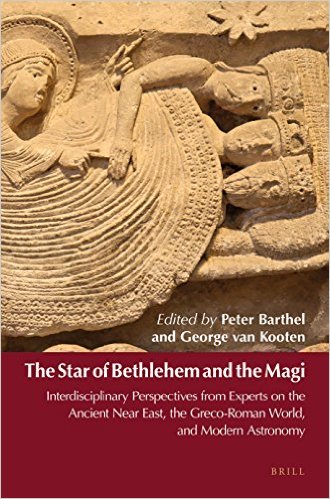 This book is the fruit of the first ever interdisciplinary international scientific conference on Matthew’s story of the Star of Bethlehem and the Magi, held in 2014 at the University of Groningen, and attended by world-leading specialists in all relevant fields: modern astronomy, the ancient near-eastern and Greco-Roman worlds, the history of science, and religion. The scholarly discussions and the exchange of the interdisciplinary views proved to be immensely fruitful and resulted in the present book. Its twenty chapters describe the various aspects of The Star: the history of its interpretation, ancient near-eastern astronomy and astrology and the Magi, astrology in the Greco-Roman and the Jewish worlds, and the early Christian world at a generally accessible level. An epilogue summarizes the fact-fiction balance of the most famous star which has ever shone.

Peter Barthel (PhD 1984) is Professor of Astrophysics at the Kapteyn Institute of the University of Groningen, researching active galaxies and quasars in the near and distant universe with ground- and space-based telescopes.

George van Kooten (PhD 2001) is Professor of New Testament & Early Christianity at the Faculty of Theology & Religious Studies at the University of Groningen, researching the Bible in its historical and cultural context. He holds degrees from the universities of Leiden, Durham and Oxford, and was visiting fellow at the universities of Cambridge (2013-14) and Göttingen (2015).