Gilgamesh is the most ancient long poem known to exist. It is also the newest classic in the canon of world literature. Lost for centuries to the sands of the Middle East 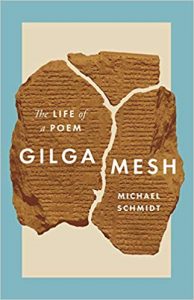 but found again in the 1850s, it tells the story of a great king, his heroism, and his eventual defeat. It is a story of monsters, gods, and cataclysms, and of intimate friendship and love. Acclaimed literary historian Michael Schmidt provides a unique meditation on the rediscovery of Gilgamesh and its profound influence on poets today.

Schmidt describes how the poem is a work in progress even now, an undertaking that has drawn on the talents and obsessions of an unlikely cast of characters, from archaeologists and museum curators to tomb raiders and jihadis. Incised on clay tablets, its fragments were scattered across a huge expanse of desert when it was recovered in the nineteenth century. The poem had to be reassembled, its languages deciphered. The discovery of a pre-Noah flood story was front-page news on both sides of the Atlantic, and the poem’s allure only continues to grow as additional cuneiform tablets come to light. Its translation, interpretation, and integration are ongoing.

In this illuminating book, Schmidt discusses the special fascination Gilgamesh holds for contemporary poets, arguing that part of its appeal is its captivating otherness. He reflects on the work of leading poets such as Charles Olson, Louis Zukofsky, and Yusef Komunyakaa, whose own encounters with the poem are revelatory, and he reads its many translations and editions to bring it vividly to life for readers.

I wrote to fifty poets across the Anglophone world and asked them five questions about Gilgamesh. It is hard to frame questions that do not prompt specific answers and reveal more about the questioner than the poem. I wanted the poem to pose its questions.

1. When do you first remember encountering the poem and in which translation (or which adaptation and medium)? [What mattered was the first remembered encounter, the real engagement. It might have come not by textual means but via the collages of Anselm Kiefer, or a surprising episode of Star Trek: the Next Generation, or via oratorios, operas or animations.]

2. Which is now your preferred translation or version?

3. Do you recall your initial impression of the poem? What residual relationship do you have with it in your own writing and thinking about writing? [Men and women responded very differently, almost as though the material of the poem is fundamentally gendered; and unless the reader is able to engage with the textures of the language or to historicise response, the narrative can alienate anyone impatient with heroes and dragons.]

4. Do you place it, in your literal or mental library, on a shelf with epics, with scripture, on another shelf (which?), or on no shelf at all?

5. Is Gilgamesh an informing element in your imaginative and critical being, or ‘being’, and if so, in what ways?

Most respondents first read the poem in N. K. Sandars’s prose translation, the original Penguin Classics version. Dick Davis, the poet and major Persian translator, describes it: ‘the prose of [her] version is quasi King James Bible English, loosened but recognizably on that model, and I have always been a sucker for prose like this, and this was/is an added reason it has remained my preferred version, even though I am aware that this is a rather dubiously appropriate model.’ Some of those reared on Sandars have gone on to other preferences. But there is something to be said for a prose version first time round: it gives the narrative clearly, without the distraction of gaps and fissures. It does, however, pose other problems.

This book recounts some of the stories surrounding Gilgamesh. It looks at the work itself and tries to read it without the back-projections that mar so much reading, the belief that ‘they’ were like an earlier version of ‘us’, and their concerns were in some way prototypes of ours. The otherness of Gilgamesh is what this book tries to be about, though the habits of the age infect the author, who is in the first degree guilty, being—like most of the poem’s would-be translators—unable to read the work in any of its original languages.

Michael Schmidt is a literary historian, poet, novelist, translator, and anthologist as well as an editor and publisher. His books include The Novel: A Biography and The First Poets. A fellow of the Royal Society of Literature, he received an OBE in 2006 for services to poetry and higher education. He lives in Manchester, England. Twitter @4Michael7