The Influence of Gilgamesh on the Bible – By Louise M. Pryke – The Bible and Interpretation: November 2019

There are only a handful of non-cuneiform references to Gilgamesh. The Flood narrative from the Gilgamesh Epic remains the most overt connection between the Hebrew Bible and the Mesopotamian epic narrative, some hundred years after it was first noted by George Smith. The Flood narrative within the biblical text is not, however, the only point of contact between the two works of ancient literature. The name of the heroic protagonist of the Gilgamesh Epic may be found in a text from the Dead Sea Scrolls known as The Book of Giants.

Gilgamesh focuses on the eponymous hero of the world’s oldest epic and his legendary adventures. However, it also goes further and examines the significance of the story’s Ancient Near Eastern context, and what it tells us about notions of kingship, animality, and the natures of mortality and immortality. 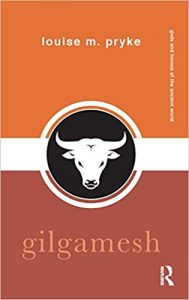 In this volume, Louise M. Pryke provides a unique perspective to consider many foundational aspects of Mesopotamian life, such as the significance of love and family, the conceptualisation of life and death, and the role of religious observance. The final chapter assesses the powerful influence of Gilgamesh on later works of ancient literature, from the Hebrew Bible, to the Odyssey, to The Tales of the Arabian Nights, and his reception through to the modern era.

Gilgamesh is an invaluable tool for anyone seeking to understand this fascinating figure, and more broadly, the relevance of Near Eastern myth in the classical world and beyond.

Louise M. Pryke is a Lecturer for the Languages and Literature of Ancient Israel at Macquarie University, Australia, and a Research Associate at the University of Sydney. Gilgamesh is her second volume in the Gods and Heroes of the Ancient World series. Her first book for the series, Ishtar, explored the world’s first goddess of love.