Digging in the Holy Land: Evangelicals are excavating occupied soil to help their cause, and Israel’s

American, ultra-religious archaeologists are descending on the West Bank to promote their beliefs

A day of archaeological digging by the Associates for Biblical Research always begins with a reading of the Bible, the very text of which they are trying to demonstrate the historical reliability.

“I am the light of the world. Whoever follows me will not walk in darkness, but will have the light of life,” repeated the group of twenty ideologically-driven Evangelical Christians, mostly pro-Israel Americans on the white religious right of the faith at odds with many of its strands in the Middle East. 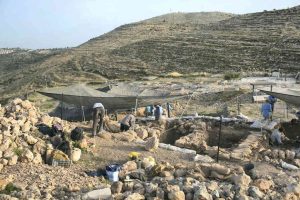 It is barely 5am in Jerusalem, and team members are just boarding a bus heading to Tel Shiloh, an archaeological site on private Palestinian land in Area C of the occupied West Bank, which is subjected to full Israeli control.

There, they say, may lie the remains of the tabernacle – the shrine that is believed to have hosted the Ark of the Covenant, a wooden chest said to have held the ten commandments on two stone tablets.

The dig site is suffused with a mild morning light. In a camel-coloured cowboy hat and sunglasses, always flashing a bright smile, team leader Dr Scott Stripling, 54, fits the Hollywood picture of an archaeologist. His work, however, is far from conventional.

A proud Evangelical Christian, he and his team believe the Bible is to be read literally and it serves as a textbook for their research.

“Is the Bible a reliable historical document? Some Israeli colleagues disagree, but I believe so,” says Mr Stripling, also arguing that many archaeologists are biased against the “holy word”.

“On the one hand, we have the Old Testament and, on the other hand, archaeological artefacts. Is there a verisimilitude? That’s what we expect.

“But I don’t walk around with a Bible in one hand and a shovel in the other.”

It is the third year of the excavation in Tel Shiloh and Mr Stripling hopes to find new clues to confirm that the elusive tabernacle was once located here. Last year, they discovered a ceramic pomegranate, a fruit symbolically associated with the holy shrine.

The pieces unearthed in Tel Shiloh are brought back to Jerusalem each day, before being analysed in collaboration with the Israeli antiquities authorities in a process critics say is disturbingly opaque. In mid-May, the Supreme Court ruled that Israel is not obligated to release information about archaeological digs in the occupied West Bank, rejecting an appeal by two non-governmental organisations.

“Everything we find is stored in Israel and if a political solution to [the Israeli-Palestinian] conflict is found, the people in charge of the territory will then have access to the objects,” Mr Stripling says.

“But I’ll be dead before that happens,” he laughs.

The inter-religious relationship between some Israeli Jews and American Evangelicals is sometimes labelled opportunistic. A subset of the Evangelical community believes that the return of the Jewish people to the land of their ancestors is necessary for the return of the Messiah and the end of times, as laid out in the Bible. Israeli authorities, meanwhile, are searching for allies to support their half-century old military occupation.

Emeline and Perry Ginhart, a newly-wed American couple, hope to make more discoveries that will help support the authenticity of their Messianic vision of Christianity. They visited Tel Shiloh last May for their honeymoon, paying thousands of dollars to be allowed to take part in the dig. Both amateurs with no professional experience in archaeology, they spent long hours clearing the tiny area of dirt they were in charge of under the scorching sun.

“By helping Israel, we are helping our cause. Our creator gave us these lands to take care of,” says Mr Ginhart.

Leah Tramer, one of the few Israelis in the team, is a former research assistant at Tel Aviv University and a self-declared “former leftist”. She says her political views changed after a particularly violent attack by Palestinian militants.

Since then, she has been working for the University of Ariel, located in a large Israeli settlement in the occupied West Bank. She helps American Evangelicals who come to the area to dig – to them, Judea and Samaria, the biblical name they give to the West Bank, is a natural extension to the current Israeli state.

“There is nothing more exciting than doing research related to the Bible,” she says.

“It is wonderful that Christians are helping us to recover our past.”

Archaeological finds are used in a political and ideological context as theoretical evidence for the importance of Jewish heritage over Palestinian links to the land.

“Israel uses archaeology as a political tool in East Jerusalem and the West Bank to try to justify its presence. This explains why they are working with Evangelicals, who support the same narrative,” Yonathan Mizrachi, director of the left-wing Israeli NGO Emek Shaveh, told The National.

“Evangelicals don’t do research for the benefit of the local community but for their own benefit and to support the occupation.”

Many other sites beside Tel Shiloh have raised controversy, in a land where archaeology is inherently political. The City of David in occupied East Jerusalem’s Palestinian neighbourhood of Silwan (also known as Wadi Hilweh) is, according to biblical references, the original site of Jerusalem at the time of King David some 3,000 years ago. It is now a popular pilgrimage site for Evangelicals from all over the world.

Last month, US Ambassador to Israel David Friedman and White House Mideast peace envoy Jason Greenblatt participated in an inaugural ceremony there to unveil the “Pilgrimage Road,” a now-subterranean stairway that is said to have served as a sacred Roman-era road for Jews to the Temple Mount.

According to local residents, underground excavations at the site, which have lasted for years, have severely damaged 15 Palestinian houses.

Mazen Aweida, 48, points to thick cracks running along the walls of his home, where the kitchen sink has half-collapsed and the bedroom floor has buckled.

“I have young children and I’m afraid debris will fall on them. It stresses me out a lot,” the father of seven whispers, glancing at his little boy sitting next to a gaping scar running from the floor to the ceiling.

Many residents are convinced that archaeological digs are part of a broader strategy to drive Palestinians out and take control of their land.

The City of David Foundation, a nationalist Israeli organisation behind the project and known by its Hebrew initials ELAD, declined a request to comment, but it has previously denied responsibility for damage to Palestinian homes.

A European specialist who has been working in the Middle East for decades decried Biblical archaeology, questioning those who believe that all of the Bible was intended to be understood literally.

“The Israeli army must stop the archaeological massacre in the occupied territories,” said the specialist, who asked not to be named.

At 1pm, the sound of a shofar, a traditional Jewish horn, echoes through the rocky hills of Tel Shiloh to mark the end of the day’s dig. But those taking part will be back tomorrow in search of the holy tabernacle, despite the fact that they are yet to find anything decisive.

“The absence of proof,” says Mr Stripling, “is not the proof of absence.”