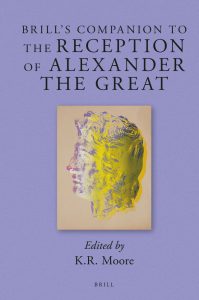 This is the third time that Brill has graced us with a companion to Alexander. The first volume focused on the historical character (Roisman in 2002), whereas the second explored Alexander’s reception in medieval literature (Zuwiyya in 2011). The book under review has a more ambitious scope in collating ‘receptions’ from the ancient world to the present day. Print book readers and bookshelves alike will feel the weight of this endeavour; the number of pages is higher than that of its predecessors combined. The scholarly community has long anticipated the volume. I personally heard rumours about it at Alexander-related conferences as early as 2013, but one chapter refers to its own inception in 2011. The book has arrived at an opportune time. University courses, publications, and conference activity continue to confirm the increasing interest in different receptions of Alexander. For example, reception became a major theme at a 2018-conference in Edmonton, organised by Frances Pownall (University of Alberta). The present volume will no doubt help researchers and students in search of new horizons for Alexander’s ‘superlative legacy’ (p. xi).

The wide array of content is presented in thirty-three chapters of varying length, with bibliographies appended to each. No house style has been imposed. A short index of topics concludes the volume. The contributions are generally of high standard, and the editor is to be commended for gathering a diverse group of scholars (pp. xiv-xxiii). Moore has organised the book into three major parts, of which the longest concerns ‘Ancient Greek, Roman and Persian receptions’ (Part I). One may always discuss the coherence and inclusions/exclusions in such edited volumes, but I consider it a wise decision to devote less attention to the Middle Ages, considering the previous Brill volume on the market, as well as the grand French project on Mythalexandre.

Kenneth Royce Moore is Senior Lecturer in the History of Ideas at Teesside University, UK.