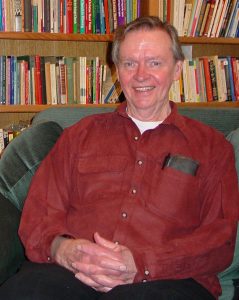 Sanders founded the Ancient Biblical Manuscript Center in Claremont in 1977, the year he moved from New York to Claremont. Under his direction the Ancient Biblical Manuscript Center houses the most complete and best preserved collection of archival quality films of the Dead Sea Scrolls in the world; museums in Jerusalem and elsewhere in the world have ordered films of the Scrolls from the Center. He has overseen the publication of The Dead Sea Scrolls Catalogue and Index used by scholars around the world, and with West Semitic Research at the University of Southern California has published a diplomatic edition of films of Leningradensis (Eerdmans, 1998), the oldest complete Hebrew Bible in the world taken by the Center’s photographers in Leningrad/St Petersburg in 1990. He became president emeritus of the Center in 2003.

Sanders has been presented with three volumes of essays (Festschriften) published in his honor: A Gift of God in Due Season, ed. by Richard Weis and David Carr (Sheffield, 1996); In Quest of Meaning in Context and Intertextuality, ed. by Craig Evans and Shemaryahu Talmon (Brill, 1997); and a Special Tribute Edition of The Folio: The Bulletin of the Ancient Biblical Manuscript Center for Preservation and Research 15/1 (fall 1998), continued in 16/1 (summer 1999).

Sanders’ scholarly interests bridge the testaments of Christian Scripture with focus on the Prophets, the literature of Early or pre-Rabbinic Judaism, including the Dead Sea Scrolls, and the New Testament. He has authored or edited twenty-nine books, and over 300 scholarly articles. He co-authored and co-edited The Canon Debate (Hendrickson Press, 2002). With Dominique Barthélemy of the Université de Fribourg he is co-editor of the (so-far) four volumes of Critique textuelle de l’Ancien Testament (Vandenhoeck & Ruprecht, 1982–).

Sanders is past president of the Society of Biblical Literature, a member of Studiorum Novi Testamenti Societas, the International Organization for Septuagint and Cognate Studies, the International Organization for Targumic and Cognate Studies, as well as other scholarly societies. He is the only American member of the United Bible Society’s Hebrew Old Testament Text Critical Project, which has so far published nine volumes of work done since 1969. That work has led to the current international preparation of Biblia Hebraica Quinta, the fifth edition of the scholarly Hebrew Bible that will be used for study and translations throughout the world in the 21st century. In 1961 in Jerusalem he unrolled the large Scroll of Psalms from Qumran Cave 11 (eleven) and published it in two volumes in 1965 and 1967. Sanders has served on the editorial boards of the Journal of Biblical Literature, Interpretation, Journal for the Study of Judaism, and Biblical Theology Bulletin, among others. His book Torah and Canon (still in print) launched in 1972 a new subdiscipline of biblical study called Canonical Criticism.

Sanders has lectured, taught, and preached at colleges, seminaries, churches, and pastors’ schools (Protestant, Catholic and Jewish) around the country and Canada. He was Alexander Robertson professor of biblical studies at Glasgow University in 1990-91, and has lectured several times at the Université de Fribourg en Suisse. He recently has lectured by invitation at the Universität Heidelberg in Germany and the University of Michigan, and read a paper in 1999 at the first-ever symposium inside the Vatican sponsored by The Holy Office, on the function of Scripture in the Church–the only non-Roman Catholic so invited. In 2002 he lectured to seminary presidents and deans from around the country at the Getty Center in Los Angels.

He has over the years received fellowships and grants from the Fulbright Scholarship Program, the Rockefeller Foundation (twice), the Guggenheim Foundation (twice), and the National Endowment for the Humanities. He has served as annual professor at the American School of Oriental Research in Jerusalem (now The Albright Institute) and twice was senior fellow at the Ecumenical Institute for Advanced Theological Study at Tantur south of Jerusalem (1972-73 and 1985).