:: The Land Rights of Women in Deuteronomy – By Don C. Benjamin – The Bible and Interpretation, August 2016

An important function of levirate marriage — requiring women without husbands or heirs to delegate their land rights to guardians – is to protect the rights of elite males by limiting the number of women exercising their land rights independently. Therefore, the primary intention of Instructions on Widows (Deut 25:5-10) is not to provide widows with children, but to put their land back into production.

:: The Impact of Sargon & Enheduanna on Land Rights in Deuteronomy Preliminary Report – By Don C. Benjamin – The Bible and Interpretation, July 2018

Continuing work in my long-ago Deuteronomy and City Life (1983) and my recent Social World of Deuteronomy: a new feminist commentary (2015) and Land Rights of Women in Deuteronomy (2017), here I propose that Birth Stories of Moses parallel Birth Stories of Sargon to compare the way land rights were distributed in Akkad by Sargon and the woman Enheduanna with the way Moses and the women in Deuteronomy distributed land rights in ancient Israel. This paradigm suggests that the intention of Deuteronomy is to describe a utopia, where ownership, administrative and use rights are responsibly distributed as instructions on the maqom sanctuary (12: 2-28), tithing (14:22–29), pilgrimaging (16:1–17) and unresolved killings (19:1–13) reflect. 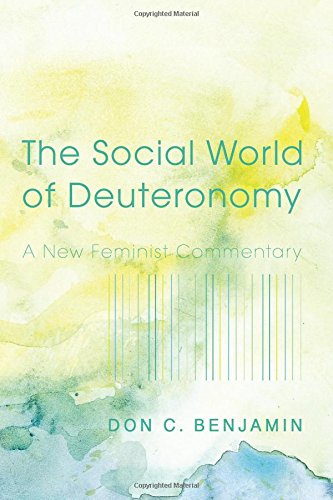 The book of Deuteronomy is not an orphan. It belongs to a diverse family of legal traditions and cultures in the world of the Bible. The Social World of Deuteronomy: A New Feminist Commentary brings these traditions and cultures to life, and uses them to enrich our understanding and appreciation of Deuteronomy today. Benjamin uses social-scientific criticism to reconstruct the social institutions where Deuteronomy developed, and those that appear in its traditions. He uses feminist criticism to better understand and appreciate how powerful elite males in Deuteronomy view not only the women, mothers, wives, and widows in their households but also their powerless children, liminal people, slaves, prisoners, outsiders, livestock, and nature. Benjamin also uses feminist criticism to describe important aspects of the daily lives of these often overlooked peoples in ancient Israel. How the elite males in Deuteronomy view the women and other members of their households seldom reflects the underlying reality of how these women and others function.

With some 30 chapters by scholars from Europe and the Americas.