BDTNS – Database of Neo-Sumerian Texts
The Database of Neo-Sumerian Texts (or BDTNS, its acronym in Spanish) is a searchable electronic corpus of Neo-Sumerian administrative cuneiform tablets dated to the 21st century B.C. During this period, the kings of the Third Dynasty of Ur built an empire in Mesopotamia managed by a complex bureaucracy that produced an unprecedented volume of written documentation. It is estimated that museums and private collections all over the world hold at least 120,000 cuneiform tablets from this period, to which should be added an indeterminate number of documents kept in the Iraq Museum. Consequently, BDTNS was conceived by Manuel Molina (CSIC) in order to manage this enormous amount of documentation (…) The work on BDTNS began, therefore, in 1996 at the Instituto de Filología (now Instituto de Lenguas y Culturas del Mediterráneo y Oriente Próximo) of the Consejo Superior de Investigaciones Científicas (CSIC), Madrid. Six years later, in 2002, it appeared online.

CDLI – Cuneiform Digital Library Initiative
The Cuneiform Digital Library Initiative (CDLI) represents the efforts of an international group of Assyriologists, museum curators and historians of science to make available through the internet the form and content of cuneiform inscriptions dating from the beginning of writing, ca. 3350 BC, until the end of the pre-Christian era. We estimate the number of these artifacts currently kept in public and private collections to exceed 500,000 exemplars, of which now more than 320,000 have been catalogued in electronic form by the CDLI.

In its early phases of research, the project concentrated on the digital documentation of the least understood archives of ancient cuneiform, those of the final third of the 4th, and of the entire 3rd millennium BC that contained texts in Sumerian, in early Akkadian and in other, still undeciphered languages. For despite the 160 years since the decipherment of cuneiform, and the 110 years since Sumerian documents of the 3rd millennium BC from southern Babylonia were first published, such basic research tools as a reliable paleography charting the graphic development of archaic cuneiform, and a lexical and grammatical glossary of the approximately 120,000 texts inscribed during this period of early state formation, remain unavailable even to specialists, not to mention scholars from other disciplines to whom these earliest sources on social development represent an extraordinary hidden treasure. The CDLI, directed by Robert K. Englund of the University of California, Los Angeles, and Jürgen Renn of the Max Planck Institute for the History of Science, Berlin, is pursuing the systematic digital documentation and electronic dissemination of the entire cuneiform text corpus bearing witness to 3500 years of human history. Collaboration partners include leading experts from the field of Assyriology, curators of European and American museums, and computer specialists in data management and electronic text annotation. The CDLI data set consists of text and image, combining document transliterations, text glossaries and digitized originals and photo archives of cuneiform.

CDLI:wiki
Directly linked to the Cuneiform Digital Library Initiative and born with it, cdli:wiki is now a collaborative project of members of the French CNRS team ArScAn-HAROC (Nanterre), and staff and students in the Faculty of Oriental Studies at the University of Oxford, with contributors in several different countries, involved in researches in history of the ancient Near East. The cdli:wiki is currently funded by the Cluster (LabEx) Pasts in the Present through the project AssyrOnline: Digital Humanities and Assyriologie.

ETCSL – The Electronic Text Corpus of Sumerian Literature
The Electronic Text Corpus of Sumerian Literature (ETCSL), a project of the University of Oxford, comprises a selection of nearly 400 literary compositions recorded on sources which come from ancient Mesopotamia (modern Iraq) and date to the late third and early second millennia BCE. The corpus contains Sumerian texts in transliteration, English prose translations and bibliographical information for each composition. The transliterations and the translations can be searched, browsed and read online using the tools of the website. Funding for the ETCSL project came to an end in the summer of 2006 and no work is currently being done to this site or its contents.

KeiBi – Keilschriftbibliographie
The International Keilschriftbibliographie (KeiBi) was first published by the Pontifical Biblical Institute, Rome in the journal Orientalia in 1940 (Orientalia N.S. 9). It became an essential tool for the study, research, and teaching of Ancient Near Eastern Studies. The search for entries, though, proves quite cumbersome – a weakness that all bibliographies issued over a substantial period of time share. To enable better access we hereby present the KeiBi online Database, where all issues already published can be searched simultaneously. The KeiBi online is made possible with the support of the German Research Foundation (DFG) within the project „Propylaeum“ – Virtual Library Classical Studies. It was developed as part of the Propylaeum module Ancient Near Eastern Studies at the University Library Tübingen, with the support of the Institute of Ancient Near Eastern Studies (IANES), University of Tübingen. Prof. Dr. Hans Neumann, in cooperation with the Institut für Altorientalische Philologie und Vorderasiatische Altertumskunde, University of Münster, provided the KeiBi entries from volume 57 (Orientalia N.S. 69, 1999) onwards. Earlier issues were scanned and digitally processed. 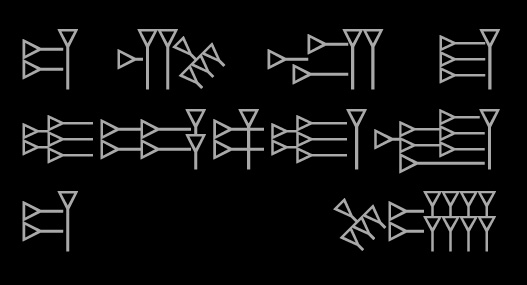