Imagined Israel: The Problem of Pilgrimage in the Holy Land

By Michael A. Di Giovine
The Marginalia Review of Books
April 9, 2017

Christian pilgrimage to the Holy Land is a longstanding tradition; our earliest evidence comes from travelers in Late Antiquity such as Egeria and the Bordeaux pilgrim who journeyed to Jerusalem when Roman emperor Constantine legalized the religion. Since then, the sites associated with Jesus’ life have captivated the imaginaries of Crusaders, explorers, proto-archaeologists, and modern literary travelers such as Herman Melville and Mark Twain, and today is a multi-billion-dollar global industry.

The study of pilgrimage generally mirrors the sentiments of pilgrims themselves, in that it has been traditionally suffused with tensions stemming from a number of contradictory experiences travelers confront. How can they be modern if they are engaging in such an age-old, almost medieval tradition? Does it count as serious pilgrimage if they avail themselves of commercial experiences and ludic activities staged by the tourism industry? Why do they travel far distances to resolve issues in their home lives? Why do they publically perform such devotional practices if they feel that it is inherently a private, “interior journey” on which they are embarking? Do Protestants even recognize pilgrimage as a viable category, since most denominations (though not all) privilege direct and unmediated interaction with the Divine through prayer over the ritualized, materialistic, place-centered practices that mark Catholicism and Eastern Orthodoxy?

In this context, Hillary Kaell’s Walking Where Jesus Walked: American Christians and Holy Land Pilgrimage is a fascinating and sensitive look at Catholic and Evangelical Protestant travelers to the biblical origin of their faiths. While there are numerous studies on Holy Land pilgrimage in a variety of languages that focus on a diversity of time periods and demographics, Kaell’s is not only one of the first to center squarely on contemporary American travelers, but it also does so through the holistic approach of following pilgrims—whom she calls the “foot soldiers” of this profitable travel industry—before, during, and after the trip itself. Her work is based on ethnographic research—the qualitative bread-and-butter of anthropological inquiry—including participant observation (interacting with and observing her subjects while participating as a pilgrim), open-ended interviews, and some survey research. As a result, this well-organized and eminently readable monograph is punctuated by thick description and illuminating, often quite emotionally engaging interviews that bring its pilgrim voices to life.

The binary oppositions between ancient/modern, pilgrimage/tourism, religion/commercialism, public/private, interior/exterior, and Catholic/Protestant in Holy Land pilgrimage structure Kaell’s book. In particular, she argues that a common thread linking all of these dualities is the way that the actors negotiate a “problem of presence.” That is, how are Jesus and the biblical events of the past made present to these travelers? By voluntarily undertaking a “trip of a lifetime” (as many of her informants call it) to quite literally “walk where Jesus walked,” pilgrims are confronted with existential and ontological questions triggered by comparing their present experiences and future objectives with an idealized, imagined religious past. They therefore must work to resolve these issues. Traveling abroad and experiencing Otherness forces them to take stock of their lives at home; confronting other Christian denominations and religions (from Messianic Jews and Arab Christians to Jewish Israelis and Muslim Palestinians) obliges them to rethink taken-for-granted assumptions about religious pluralism. Moreover, encountering the directives of the tour’s spiritual leaders with their desire to take photographs and purchase souvenirs compels them to negotiate their notions of duty, kinship, age and gender. Indeed, these latter elements are central to Kaell’s analysis: a vast majority of these pilgrims are retired women (“middle-old,” they say), who frequently make sense of their actions by drawing on common gender stereotypes: that women are more spiritual than men, more inclined to shop, and bear a larger burden for transmitting religious faith to their family. 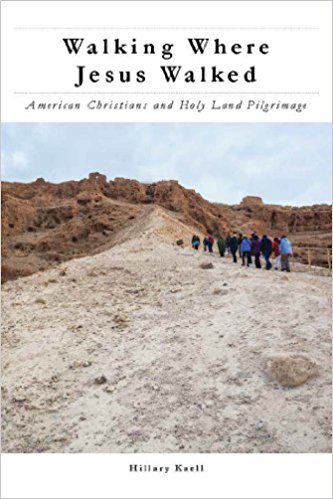 Michael A. Di Giovine is Assistant Professor of Anthropology at West Chester University and Honorary Fellow at the University of Wisconsin-Madison. The author of The Heritage-scape: UNESCO, World Heritage and Tourism and co-editor of The Seductions of Pilgrimage: Sacred Journeys Afar and Astray in the Western Religious Tradition, his research focuses on the intersection of pilgrimage, tourism and cultural heritage, particularly as it relates to the global cult of St. Padre Pio of Pietrelcina and UNESCO’s World Heritage program. A former tour operator, Michael is Convenor of the Anthropology of Tourism Interest Group at the American Anthropological Association, and co-editor of Lexington Books’ series, The Anthropology of Tourism: Heritage, Mobility and Society. Home Page: http://www.michaeldigiovine.com/

The Seductions of Pilgrimage explores the simultaneously attractive and repellent, beguiling and alluring forms of seduction in pilgrimage. It focuses on the varied discursive, imaginative, and practical mechanisms of seduction that draw individual pilgrims to a pilgrimage site; the objects, places, and paradigms that pilgrims leave behind as they embark on their hyper-meaningful travel experience; and the often unforeseen elements that lead pilgrims off their desired course. Presenting the first comprehensive study of the role of seduction on individual pilgrims in the study of pilgrimage and tourism, it will appeal to scholars of anthropology, cultural geography, tourism, heritage, and religious studies.

This book explores the paradoxes of Self–Other relations in the field of tourism. It particularly focuses on the ‘power’ of different forms of ‘Otherness’ to seduce and to disrupt, and, eventually, also to renew the social and cosmological orders of ‘modern’ culture and everyday life. Drawing on a series of ethnographic case studies, the contributors investigate the production, socialization and symbolic encompassment of different ‘Others’ as a political and also an economic resource to govern social life in the present. The volume provides a comparative inductive study on the modernist philosophical concepts of time, ‘Otherness’, and the self in practice, and relates it to contemporary tourism and mobility.