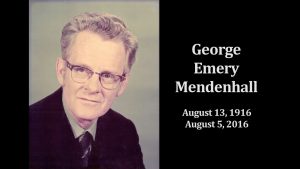 A native of Iowa, George Mendenhall took his undergraduate studies at Midland College, Fremont, Nebraska, and graduate studies at Johns Hopkins University, where he received his Ph.D. degree in biblical studies in 1947. He simultaneously studied at Western Theological Seminary, Fremont, Nebraska, and the Lutheran Theological Seminary, Gettysburg, Pennsylvania, and was ordained minister of the United Lutheran Church in America in 1942.

Professor Mendenhall was appointed associate professor of ancient and biblical studies in the Department of Near Eastern Studies at The University of Michigan in 1952, and was promoted to full professor in 1958.

Professor Mendenhall developed biblical studies at Michigan into one of the leading centers in the field, with his pioneering multi-disciplinary research, which combined linguistics, sociology and archaeology. His book, The Tenth Generation: The Origins of the Biblical Tradition, 1973, which appeared in paperback a year later, and his Law and Covenant in Israel and the Ancient Near East, 1955, which was soon translated into other languages, are milestones of biblical studies.

Professor Mendenhall has received many honors from his peers, including two honorary doctorates, and numerous lectureships, between which was the Henry Russel Lectureship at Michigan in 1973, and a Festschrift in 1983.

George Emery Mendenhall, emeritus professor of Middle East Studies, died a few days short of his 100th birthday. He is survived by his sister, Helen Elizabeth Mendenhall of Sugar Land, TX, and by his five sons and their families: George David, Lauri Philip, Stanley Theodore, Gordon Louis, Stephen Robert, with numerous grandchildren and greatgrandchildren, many of whom live in Ann Arbor, MI, or nearby. He was predeceased by his wife of 70-plus years, Eathel Louise Tidrick, who died less than a year prior at 101, and by his older brothers, the Rev. Newell Newton and the Rev. Alfred Louis, and by his younger brother, Olney Wendell, and his younger sister, Mildred Christine Dunn.

Professor Mendenhall was born in Muscatine, Iowa, the third son of George Newton Mendenhall, a Lutheran minister and college professor, and Mary Christine Johnson, the daughter of a Swedish Lutheran minister. His father had pastorates in Colorado, Nebraska and Iowa, and then completed a Ph.D. in Psychology at the University of Iowa and became a professor at Midland College in Fremont, NE, in 1922, where the family lived for several years, and subsequently at Sterling College, KS. Young George attended local schools on an accelerated track and completed the B.A. requirements at Midland College in 1935, having developed language skills (German, French, Greek) and fostered musical talents and his special interest in photography. (He also began spending his summers working in a photo shop at Yellowstone Park.)

He continued on in Fremont, during the Great Depression, enrolling in a small Lutheran seminary where he began his engagement with Semitic languages. After completing one year in the local seminary (Western), and finally being awarded his B.A. from Fremont College (1936), he followed the path of his brother, Newell, in gaining a scholarship to attend Gettysburg Theological Seminary (Lutheran). He completed the B.D. program in 1938 with a thesis investigating the possible Aramaic origins of the Gospel of John.

He then applied to Johns Hopkins to study with W. F. Albright, widely regarded as the leading American scholar on ancient Israel. He studied there from 1938 to early 1942 (being elected as a Phi Beta Kappa member), where the graduate courses were concentrated on one day a week, even while teaching church history and language courses at Gettysburg Seminary, 1940-42. At that point he decided to seek a pastorate and began serving Trinity Lutheran Church in Laramie, Wyoming.

By early 1943, in response to an urgent need for translators of Japanese, he volunteered and began Japanese language training in Boulder, CO. Prior to completing the program he married Eathel Tidrick (Dec., 1943), whom he had first met at Yellowstone Park in 1941. He was commissioned as an officer in the USNR, serving with Naval Intelligence in the Pacific (and in Japan) until several months after the end of the war, when he was finally reunited with Eathel and met their first-born son. He then returned to Johns Hopkins and was awarded a Ph.D. in 1947 for a thesis on “The Verb in Early Northwest Semitic Dialects.”

He accepted an invitation to teach at Hamma Divinity School (Ohio) and taught there from 1947-52, and also served as a visiting professor at the University of Michigan for the summer sessions in 1951 and 1952, having drawn the attention of George G. Cameron, then developing a department of Near Eastern Studies at Michigan. He joined the Michigan faculty (Near Eastern Studies) in 1952, retiring in 1986, having served on many university committees and as departmental chair, a seminary trustee (Chicago), and in various offices and editorial roles for learned societies. He especially appreciated the importance of the social sciences at Michigan and enjoyed his association with his many colleagues in Middle East Studies and as well as in other fields, such as Paul Kauper (Law School), Gerhard Lenski, Elman Service and Louise Sweet (Anthropology & Sociology), and Ernst Pulgram (Romance Languages). While teaching at Michigan he also directed many doctoral dissertations. He served as Annual Professor at the Jerusalem School (ASOR; now The Albright Institute) in 1955-56 and as Director, 1965-66. In 1964, he was one of only twenty-six scholars, several from overseas, who presented invited papers at the 100th meeting of the Society of Biblical Literature. He was awarded an NEH Senior Fellowship in 1971. The University honored him by naming him the Henry Russel Lecturer for 1973. In 2001 he was one of the seventeen faculty or graduates of Gettysburg Theological Seminary singled out for recognition from its 150-year history. He was the author not only of several seminal essays that generated considerable discussion but also of numerous scholarly articles up through 2006, many of which also established new directions for scholarly research. He was fascinated by undeciphered inscriptions and himself proposed a decipherment of the small corpus of four-millennia old Byblian syllabic texts that had been published in 1945.

His books include Law and Covenant in Israel and the Ancient Near East (Pittsburgh, 1955), The Tenth Generation: The Origins of the Biblical Tradition (Baltimore, 1973), The Syllabic Inscriptions from Byblos (Beirut, 1985), and Ancient Israel’s Faith and History: An Introduction to the Bible in Context, ed. by Gary A. Herion (Louisville, 2001).

A Festschrift in his honor, The Quest for the Kingdom of God, edited by former students, appeared in 1983 (Winona Lake, IND). A volume of his collected essays, ed. by G. A. Herion and H. B. Huffmon, is scheduled to be published in 2017.

He also served as the Catholic Biblical Association’s visiting scholar at the Pontifical Biblical lnstitute, Rome, in 1985, and, following his retirement, taught in the M.A. program at Yarmouk University in Jordan, 1987-93. There he promoted the photographing and study of thousands of early inscriptions and graffiti, mainly in pre-Islamic Arabic, and directed several M.A. theses. Over several decades he also lectured at many universities in North America, Europe, the Near East, and Africa. He was also awarded an honorary doctorate by Fremont College.